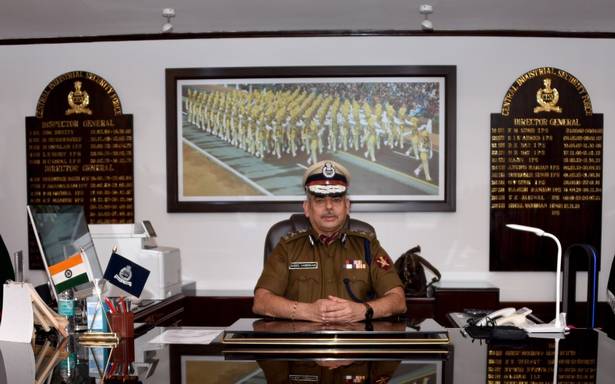 The Appointments Committee of the Cabinet (ACC) headed by PM Modi had approved the order for appointing Mr. Singh as the new CISF DG last week

IPS officer Sheel Vardhan Singh on Monday took charge as the new director general of the CISF, a central paramilitary force that guards major civil airports and vital installations of the country.

He was accorded a ceremonial guard of honour by the troops before he took charge of the force at its headquarters located in the CGOs Complex on Lodhi Road in New Delhi.

The Appointments Committee of the Cabinet (ACC) headed by Prime Minister Narendra Modi had approved the order for appointing Mr. Singh as the new CISF DG last week.

NSG DG M.A. Ganapathy has been holding the additional charge of the force since May this year after then CISF DG Subodh Jaiswal was moved as the CBI Director.

The new CISF DG is a 1986-batch officer of the Indian Police Service (IPS) belonging to the Bihar cadre and has been serving at the Centre as a special director in the Intelligence Bureau (IB).

"During his distinguished career spanning 35 years, he (Mr. Singh) has held many important and sensitive positions in the State of Bihar and during central deputation to government of India. On central deputation, the new DG has also served in the Ministry of External Affairs at the Indian High Commission in Dhaka, Bangladesh as a first secretary," a CISF spokesperson said.

Mr. Singh is the 29th head of the about 1.62 lakh personnel strong force that was raised in 1969. It currently guards 64 civil airports and a number of important installations in the aerospace and nuclear domains of the country, the Delhi Metro and historical monuments like the Red Fort and the Taj Mahal.