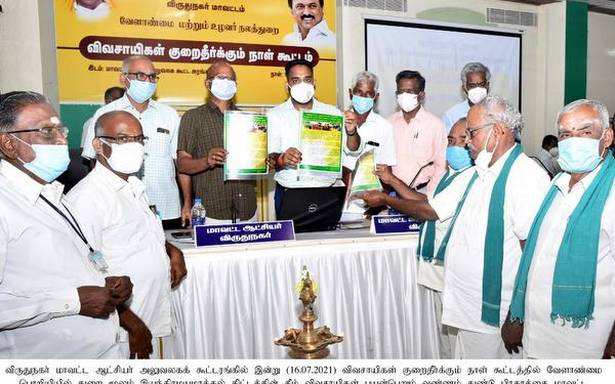 Appealing to the district administration to shift the copra procurement centre from Sattur to Watrap, a farmers’ association pleaded here on Friday that if done the move would save them on transport and other costs. They said this at the monthly grievances meeting for the farmers that was held here at the Collectorate.

District Collector J. Meganath Reddy presided and also launched a COVID-19 vaccination camp for farmers and 35 of them got inoculated.

During the meeting, the Collector assured the farmers that he would convene a review meeting with the PWD engineers to solve the waterbodies related issues in the district.

On the wild animal menace that had led to the destruction of crops and sometimes also gave tense moments to the lives of the farmers, he said that the Forest department officials would be roped in to examine the modalities on preventing conflict between the farmers and the wild animals. The farmers also wanted the officials to give them a blanket order to cut ‘seemai karuvel’ trees in the district as it posed danger to the waterbodies. However, the authorities said that they would look at it on a case by case basis.

Utilising the meeting, the Collector appealed to the farmers to use the technology available for them and assured them to give exposure to experts and academics. A faculty member Prof Ramkumar from the Kovilankulam Regional Research Centre addressed the farmers.

There were representations from many farmers on the status of the crop loan waiver announced prior to the general election by the then government.

The Collector suggested to the officials to come prepared with questions raised by the farmers in the earlier meetings from next month onwards.

The agriculture and horticulture department officials gave a broad outline about the subsidy available and also discussed the need for preparations with the monsoon setting in. The corn growers wanted certain precautions shared with them well in advance as pest had hit them badly in the past seasons.