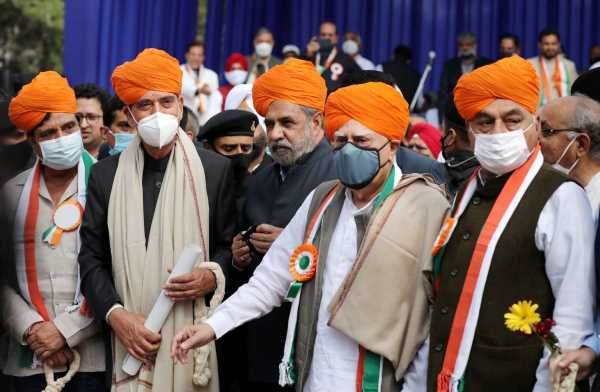 Senior Congress leader M Veerappa Moily on Sunday said some leaders “misused” the G-23 and asserted that if anyone persists with its institutionalisation it would be for “vested interest” as reform of the party was already underway under Sonia Gandhi.

The former Union minister also voiced strong support for poll strategist Prashant Kishor’s induction into the Congress and said those opposing his entry into the party were “anti-reform”.

In an interview with PTI, Moily, who was among the 23 leaders who wrote to Gandhi last year seeking organizational overhaul, opposed the institutionalisation of the G-23 and said “some of us put our signatures only for reform of the party from within and to rebuild the party, not to destroy it”.

“Some of our leaders misused the G-23. No sooner did Sonia ji think of reforming the party from within and from the grassroots level, we did not subscribe to the idea of G-23,” the senior Congress leader said, without taking any names.

He said with the initiation of reform under party chief Sonia Gandhi’s leadership, the G-23 has “no role and has become irrelevant”.

“If they (some leaders) persist (with G-23) that means there is a vested interest for a few of them to work against the Congress party which we don’t subscribe to and rather oppose it,” Moily said.

Anybody who again uses the instrument of G-23 is doing a great disservice to the Indian National Congress and its legacy, he said, adding such actions would help the Congress’ rivals.

His remarks assume significance as many leaders of the G-23 have either distanced themselves from it or have been silent following the letter they wrote last year. Out of that group of 23 leaders who wrote to Sonia Gandhi, Jitin Prasada has switched over to the BJP.

A few members of the G-23 had got together at social gatherings a couple of times at Kapil Sibal’s residence recently and reportedly discussed party issues. At one of the gatherings, Sibal had invited a host of opposition leaders as well to his residence.

Moily said the “major surgery” of the party that he has been talking about to revitalize the organisation was already being contemplated by Sonia Gandhi.

“She (Sonia Gandhi) is active and taking decisions, such decisions are needed,” he said, adding he was happy with the steps taken by the party chief.

Asked about speculation that Kishor could join the Congress, Moily said it was advisable that he joins the Congress and injects reforms from within.

Moily urged those within the party opposing Kishor’s entry into the Congress not to do so, saying it was important for the country and the Congress that the party be reformed, which, he said, was the intention of Sonia Gandhi and Rahul Gandhi.

According to sources, Congress president Sonia Gandhi will take a final call on the induction of Kishor and has held discussions with several senior leaders on the issue.

Asked if he thinks Kishor’s induction will be beneficial for the party, Moily said the poll strategist has proved that he is successful in working out strategies.

“Instead of working from outside, if he joins the party, it will be quite beneficial,” he added.

“Let there be strong willpower to join hands with Sonia ji to ensure that the party’s organisation is strengthened within a couple of months. This is what I proposed that Prashant Kishor can inject that kind of resurgence of the Congress party (that is needed) by plan and design,” Moily said.

He also said the Congress is the main plank of the politics of this country.

“We may lose sometimes but it cannot be said that we will lose forever. For example, in 1977 we lost and in 1980 with all the allegations against her (Indira Gandhi), ultimately the people found that they wanted the Congress and Indira ji came back, this is the history of the Congress,” he said when asked about NCP chief Sharad Pawar’s remarks suggesting that Congress’ situation was now like impoverished landlords.

Moily also pointed out that Pawar himself has acknowledged that Congress was the only party in power in multiple states that could take on the BJP.

“Congress is the fulcrum of the strength of the politics of this country,” Moily asserted.

Asked if Congress would be the fulcrum of an Opposition alliance to take on the BJP in 2024 elections, he answered in the affirmative.

“Ultimately the government cannot function to serve the interest of a group of people, few castes or few religions, it cannot be done. Just because the people are silent it does not mean that they cannot stage a political revolution, they can do it but only under the leadership of the Congress,” Moily said.

It should be remembered that the integrity of the Constitution of India is under threat under the NDA regime, he alleged.

Hitting out at those alleging that the Congress was all about the benefit of one family, Moily said Sonia Gandhi had sacrificed for the country and never hankered for posts.

“We should not forget that Sonia ji represents martyrs like Indira Gandhi and Rajiv Gandhi, and also the Congress’ virtues brought independence and sustained democracy in the nation,” he said.

The Congress is the backbone of forces to take on the BJP, Moily said.

Asked about calls from within the Congress that Rahul Gandhi should be made the chief of the party again, he said the Wayanad MP was best suited to lead the party but added that presently it was important to turn attention to reorganise and revamp the party.