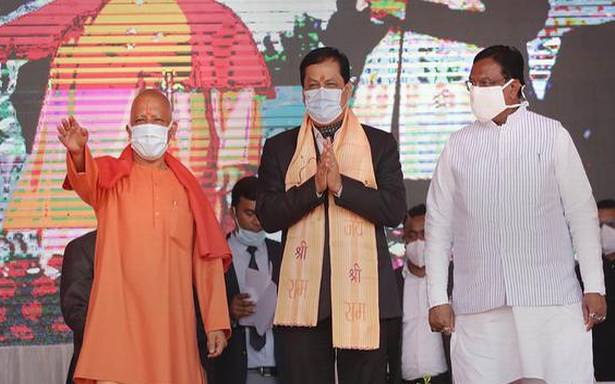 Can the “followers” of Maharaja Suheldev and Salar Masood join hands, asked Uttar Pradesh Chief Minister Yogi Adityanath on Friday as he accused previous governments in the State of not according samman (honour) to the legendary backward caste warrior Suheldev.

The main Opposition Samajwadi Party (SP) has emerged as a strong challenger for the 2022 Assembly elections and has allied with several small, OBC-based parties including the Suheldev Bharatiya Samaj Party (SBSP) of Om Prakash Rajbhar, which stakes claim to the legacy of Suheldev.

Mr. Adityanath’s reference to the differences between the followers of Suheldev and Salar Masood reiterates the BJP’s discourse questioning the compatibility between Muslims and Hindu backward castes and Dalit voters. and in effect the alliance of SP and SBSP. The BJP has repeatedly spoken of the SP as a party that favours Muslims.

Mr. Adityanath also accused the SP of “insulting” Sardar Vallabhbhai Patel over the reference to Muhammad Ali Jinnah made by SP president Akhilesh Yadav at a recent rally in Hardoi and termed the party as “nation breakers.”

“Those who are nation breakers, they either exploit farmers, play with the future of the youth, fire on Ram bhakts or glorify nation breakers like Jinnah and carry out dacoity on the government schemes if given an opportunity,” Mr. Adityanath said in Bahraich addressing a BJP election rally.

Much of the focus of his pitch was on Suheldev, the legendary Bhar warrior, whose historical existence is shrouded in mystery but has emerged as a caste icon among the Rajbhars (OBC) and the Pasis (second largest Dalit caste in U.P.) — both of whom have been competing for his legacy. Perhaps to avoid any conflict over his legacy, the BJP has shied away from calling him Suheldev Rajbhar or Suheldev Pasi, preferring Maharaja Suheldev instead as in the stamp released by Prime Minister Narendra Modi in 2018.

The BJP-RSS have aggressively tried to portray Suheldev as a Hindutva warrior who stopped the march of Muslim invader Ghazi Mian or Salar Masood, a nephew of Mahmud Ghaznavi, in Bahraich and halted Islamicisation of the region.

Mr. Adityanath said the SP, BSP and the Congress did not give any respect to Suheldev while the BJP governments at the Centre and in the State did and spoke of the memorial under construction.