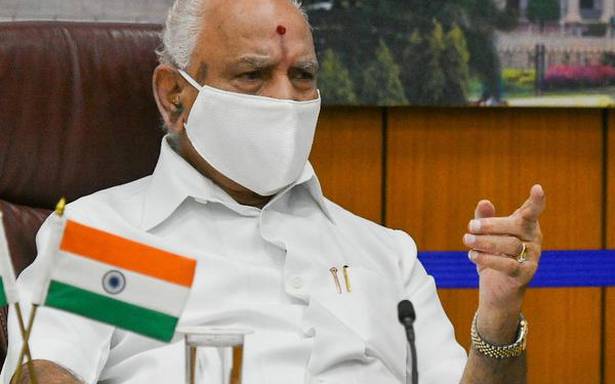 Governor of Karnataka had refused sanction for his prosecution under provisions of the Prevention of Corruption Act, 1988

A special court in Bengaluru on Thursday declined to entertain a private complaint against Chief Minister B.S. Yediyurappa on the allegation of corruption as the Governor of Karnataka had refused to grant sanction for his prosecution under provisions of the Prevention of Corruption Act, 1988.

The Special Court set up to deal with criminal cases against MPs/MLAs of Karnataka passed the order while dismissing the complaint filed by Abraham T.J, a social activist and president of the Karnataka Anti-Graft and Environmental Forum, Bengaluru.

“The complaint is not maintainable in the absence of valid sanction, and accordingly dismissed,” the court said in its order.

The complainant wanted the special court to either take cognisance of offences under the PC Act against nine persons, including Mr. Yediyurappa and some of his family members, or order investigation in relation to the allegation of getting bribe of ₹12.5 crore in relation to a contract given to a private company for a housing project of the Bangalore Development Authority.

The petitioner, in his complaint filed in the special court, pointed out that he had lodged a complaint with the Anti Corruption Bureau (ACB) on November 25, 2020 against Mr. Yediyurappa and others on these allegations. However, instead of making attempts to get originals of the documents cited by the complainant, the ACB had closed the complaint on December 15, 2020 without even considering the clarifications given by him.

It was alleged in the complaints that Mr. Yediyurappa abused his office and bribe was received by his family members from representative of M/s Ramalingam Construction Company Pvt. Ltd. for resuming a housing project that was stalled.