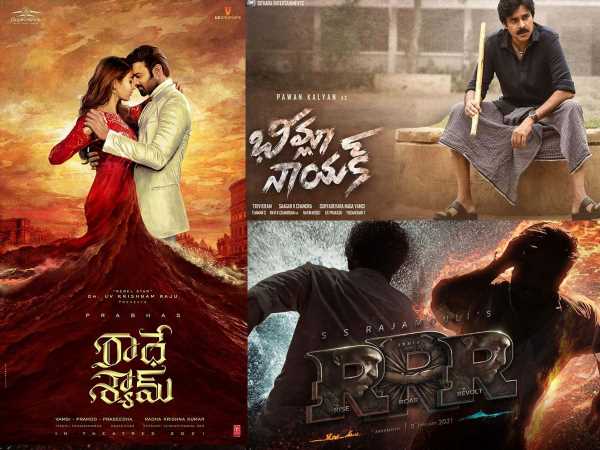 According to the latest report, the active Telugu Film Producers Guild has arranged a meeting today with producers to move one film – RRR, Bheemla Nayak,   Radhe Shyam, out of the Sankranthi race.

Few days ago, the producers of Bheemla Nayak confirmed that the movie is hitting the screens on 12th January as planned, the whole Telugu Film Industry got shocked with the move.

And today, Active Producers Guild has called for an immediate meeting in order to resolve the issue. Apparently, the producers of Bheemla Nayak have already moved out their recent movie Varudu Kavalenu from the Dussehra race and that resulted in a huge loss of collections at the box office. Now the producers of Bheemla Nayak have now decided to not miss out on Sankranthi 2022 and are ready to compete with Rajamouli’ magnum opus RRR which is releasing on 7th January and Radhe Shyam   which will arrive at the theaters on 14th January 2022.

As the three big budget movies are arriving at the  theaters on the eve of Sankranthi, they will face  shortage of theatres in the Telugu states while the film won’t disturb them much in other states. Also if Bheemla  Nayak starring Power Star Pawan Kalyan and Rana Daggubati turns out a mass treat as expected, then the collections of RRR and Radhe Shyam might see a drop in B  and C centres.

So now we have to wait and see  which movie will be out of Sankranthi race.