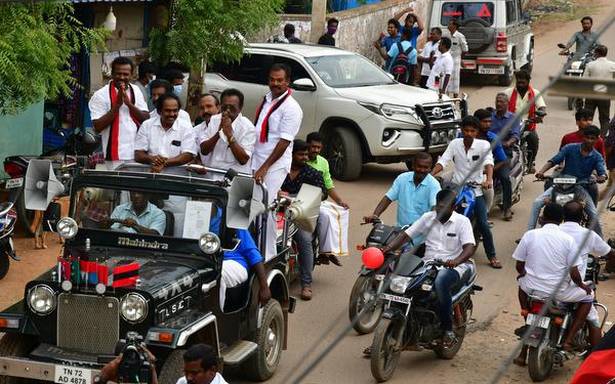 Intense electioneering for the first phase of rural civic polls, scheduled for Wednesday, ended on Monday evening without any toward incident.

Unlike the Parliamentary and Assembly polls, electioneering for the rural civic polls, to be held in two phases in Tirunelveli and Tenkasi districts, is intense as it is being fought on party and caste lines. Though the State Election Commission has imposed restrictions and stipulated poll codes, the candidates spent a lot and used as many vehicles as they can deploy for the campaign.

While political affiliation of the candidates took the back seat, caste factor played a major role in the electioneering as the candidates, after filing their nominations, met the caste leaders to get their backing and the community votes. Only later did they meet the temple administrators who were promised of temple renovation or ‘assistance’ for organising temple festivals.

Whipping caste sentiments indirectly, the election campaign messages were shared among different caste groups on social media in a bid to keep the caste sentiments high. Fortunately, electioneering with caste overtones did not result in any clash, thanks to precautionary measures taken by the district administration and the police.

The electioneering also marked the commissions and the omissions of those who represented the people in various local body positions in the past. Those who gave tall promises in the past to fetch votes and subsequently failed to fulfil them were mocked on the social media by their rivals in a bid to defeat them.

In places such as Kuruvikulam, Avudaiyanur, Oothumalai and other areas of Tenkasi district, the voters, especially the youth, warned the aspirants, through WhatsApp messages, against indulging in corrupt practices upon getting elected. The messages shared through social media said those who get elected to serve the public should be transparent and upright throughout their term. Else it would result in questioning them during gram sabha meetings and other forum, for which they should be prepared.

Though communally surcharged Tirunelveli and Tenkasi are known for the people’s volatile nature, especially during elections, an alert police exerted pressure on the troublemakers all the time. Sensing the trouble in store, Superintendent of Police N. Manivannan ensured the detention of a few caste leaders under the Goondas Act well before filing of nominations.

The SP made night visit to a few trouble spots, including Munneerpallam area that witnessed two gruesome murders recently with caste overtones. He said police personnel from eight districts had been deployed in the district to strengthen security arrangements.

He also took out a flag march in Munneerpallam, Marudham Nagar and Mullai Nagar areas as these villages remain tense after the two murders.