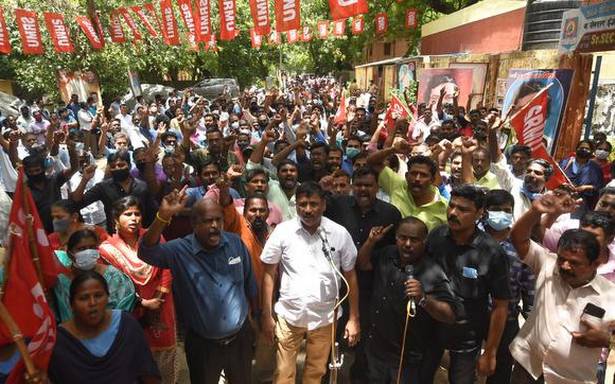 Members of Southern Railway Mazdoor Union on Wednesday staged a demonstration against the Centre’s move to monetise public sector units.

The union divisional secretary, J.M. Rafi, condemned the BJP Government for selling the public sector units that were built with the sweat of the citizens in the last 75 years.

The Centre should give up privatising railway that has grown with the contribution of the people. The Centre was planning to privatise 400 railway stations across the country and also privatise 10 routes and 90 trains.

They pointed out that railway workshops, Niligiri mountain train, Konkan railways and 762 km of express freight corridor were also among the privatisation plan, said its assistant divisional secretary, V. Ramkumar, who led the protest.

It was not just the public sector units, but also the permanent employment of lakhs of workers was at stake, he added.