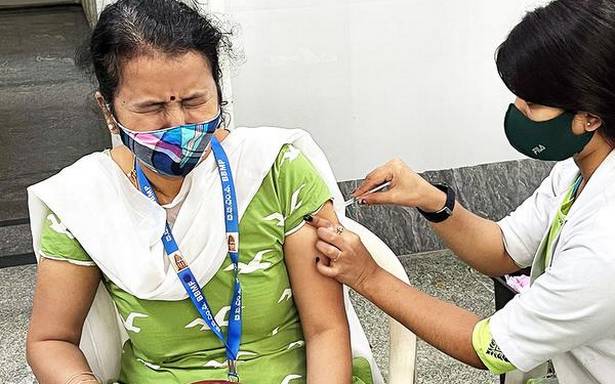 Daily testing on some days in the last week up to around 1.8 lakh

With Chief Minister Basavaraj Bommai making it clear last week that restrictions will have to be re-imposed and school reopening will have to be put off in districts where the test positivity rate (TPR) is above 2%, district authorities are now under pressure to increase daily testing.

TPR, which is a vital marker in assessing the spread of an outbreak, is the percentage of people who are found to be infected from those who are being tested. According to epidemiologists, a high positivity rate indicates that testing is relatively limited to people with high suspicion of COVID-19 and may miss new chains of transmission in the community.

Over 81% of the total 4,18,39,866 tests conducted till date have been done using Reverse Transcription-Polymerase Chain Reaction (RT-PCR) method.

Sources in the State’s Technical Advisory Committee (TAC) told The Hindu that officials were compelled to conduct more tests to keep the TPR under 2%. “The CM’s direction is now working as an in-built pressure wall in the district health system to increase tests. If a particular district is forced to re-impose these restrictions in case TPR goes up, it will not augur well with the public. Also, it will indicate that the district is not monitoring the situation effectively,” sources said.

Karnataka’s average TPR in the last seven days (prior to August 20) is 0.9%. While eight districts have a TPR higher than the State average, Dakshina Kannada, Udupi and Kodagu have the highest TPR – 3.24%, 2.84% and 2.23% respectively. The test positivity rate is inching towards 2% in Chikkamagaluru and Hassan that now have a TPR of 1.72% and 1.61%, respectively.

C.N. Manjunath, nodal officer for labs and testing in the State’s COVID-19 task force, said the only way to keep TPR under check is to increase tests. “The State has been consistently doing over 1.5 lakh tests daily for the last 15-20 days. The daily tests had reduced considerably during the lockdown period as people were not coming out to get tested,” he said.

Pointing out that at least 10% of the daily tests should be focussed on children in the 0-18 years group, Dr. Manjunath said that special attention should be given to children as this age group is likely to be hit the most during the third wave. He added that it is now vital to continue the same pace of testing for another 4 to 5 months.

What is R number?

TAC member V. Ravi, who is also the nodal officer for genomic confirmation of SARS-CoV-2 in Karnataka, said, “If the TPR goes beyond 5% and the Reproductive Number (R No.) crosses 1, the doubling time will reduce drastically. R No. describes how many people each infected person will infect on an average and if this goes beyond one, it will be very difficult to control the situation. It will indicate the beginning of another wave,” he said.

“It is for this reason that we had suggested during the Chief Minister’s meeting last week that at least 20 contacts should be tested for every positive case (1:20). As of now, 10 contacts are being tested,” he pointed out.