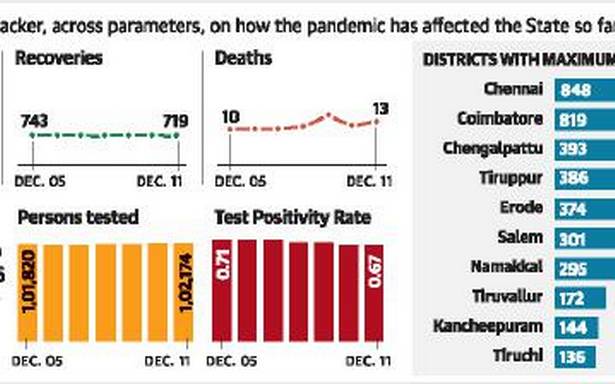 Three districts — Kallakurichi, Perambalur and Theni — recorded no case, and 20 saw fewer than 10 each. Ariyalur, Ramanathapuram, Tenkasi and Virudhunagar logged a single case each.

The number of daily cases continued to exceed 100 in both Chennai and Coimbatore — the former logged 120 cases, taking its tally to 5,59,359, while the latter saw 108 cases, pushing its tally to 2,51,500. There were 54 cases in Erode and 50 in Chengalpattu. While 49 people tested positive in Namakkal, there were 48 cases in Tiruppur and 43 in Salem. Thirty districts recorded no death due to the infection. Of the 13 fatalities, four were reported in Coimbatore, while there were two deaths each in Chennai and Erode.

Three of the deceased had no co-morbidity. Among them was a 35-year-old man from Coimbatore, who was admitted to the Coimbatore Medical College Hospital on November 27, and died on December 10 due to COVID-19 pneumonia.

Another 719 people, including 102 in Chennai and 121 in Coimbatore, were discharged after treatment. With this, the total recoveries touched 26,90,346. As many as 7,770 people are currently under treatment for COVID-19 in the State. Of them, Chennai’s active caseload stands at 1,307, and Coimbatore’s at 1,200. Tenkasi has the least number of active cases at six, while Perambalur and Theni have eight each.