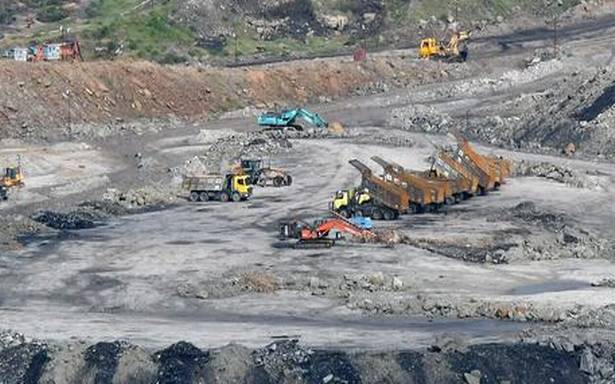 The power utilities in most southern States are staring at coal shortage and scrambling to avoid power restrictions. Majority of the thermal power plants in various States were running with stocks sufficient only for three to four days against having reserve stocks to last for at least two to three weeks in the past.

In Tamil Nadu, the State power generating stations were maintaining an average 4 to 4.5 days of coal and the power officials were confident that they would be able to maintain this coal stock in the future. A senior official of the Tamil Nadu Generation and Distribution Corporation (Tangedco) said the State had been receiving coal in limited supply, with power stations maintaining a cumulative average of four days’ stock. He said the normal coal stock maintained by Tangedco would usually be nine to 10 days. As of Sunday, more than five days of coal stock was available in north Chennai, three days in Mettur and five days in Thoothukudi. Tangedco has three thermal stations, with a total capacity of 4,320 mega watt.

The Kerala State Electricity Board (KSEB) was keeping a close watch on the developments. Although the KSEB had managed the situation without power restrictions thus far, a sharper dip in supply from Central generating stations would warrant tight measures, officials of the State utility said.

The State had been recording a daily shortage of 120 MW-200 MW in supply during peak consumption hours.

The KSEB had told its 1.3 crore consumers to reduce electricity usage during the evening hours when consumption peaked.

In Andhra Pradesh, while the total daily requirement of coal at AP-Genco plants was 70,000 tonnes, the present supply was only 40,000 tonnes. Three units had been shut due to a coal shortage. Sources said the existing stock would last for another two days.

Though Karnataka was presently managing its power supply without any problem, it was bound to face the heat of the coal shortage soon as none of its three State-owned thermal power stations had adequate coal stock to operate all the generating units at optimal level.

While the rains had reduced the demand for power, especially agricultural load, the present hydel generation, too, stood at the optimal level, covering up for the coal shortage. But the present coal stock and the daily supplies were not sufficient enough to run all the three thermal stations at full capacity, said sources in these stations said.

To tide over the coal shortage, the Karnataka Government had sought additional coal supply from the Centre.

To step up supply

With the increasing demand for coal, particularly in the power sector, the Singareni Collieries Company Ltd (SCCL) in Telangana has decided to dispatch coal by at least 34 railway rakes a day from the present 30 rakes to its contracted buyers.

The decision comes in the backdrop of the Ministry of Coal’s direction to the coal companies to scale up production and dispatches to meet the increasing demand and improve coal stocks at thermal power plants.

(With inputs from Kerala, Andhra Pradesh, Karnataka and Telangana bureaus)