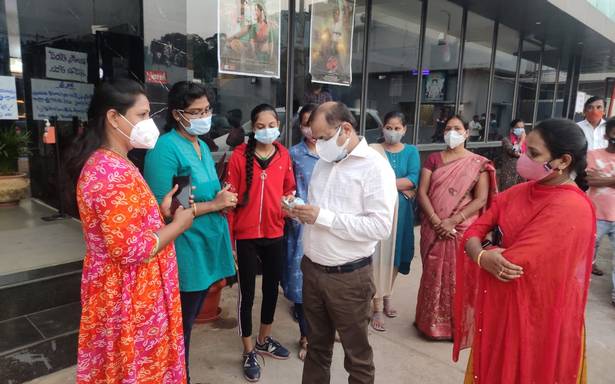 Vizianagaram district administration directed all theatre owners to get statutory licenses and from Fire, Municipal authorities and other departments as early as possible to run the shows in their respective cinema halls. The senior officials including Collector A. Suryakumari, Joint Collector G.C. Kishore Kumar and Parvatipuram Sub-Collector Bhavana have been inspecting theatres frequently to verify their licenses and implementation of recent orders with regard to ticket rates. With their directive, TBR Hall of Parvatipuram, Saikrishna Theatre of Pusapati Rega, Gopala Krishna Theater-Bhogapuram, S-3 theatre in Nellimarla were seized a few days ago. It was observed that Sai Krishna Theatre has failed to renew fire safety licenses for the last five years.

Lack of cleanliness and sale of tickets at higher prices are also other reasons for the seizure of those theatres. The officials said that the licenses and proper maintenance were statutory irrespective of losses and profit of theatres. “The government will not compromise on the safety of people. The proper cleanliness and maintenance of social distance are also important to prevent to spread of Covid-19,” said A.Suryakumari.

The exhibitors who were disappointed with stringent norms said that they would not be in a position to run the theatres in future. They say their income has come significantly come down with the restriction on ticket prices. The ticket rates were fixed between ₹5 and ₹20 in Gram Panchayats and they are up to ₹35 in Nagar Panchayats. As far as municipal areas are concerned the ticket rates were fixed between ₹30 to ₹100. The multiplex theatre owners can collect between ₹75 and ₹250 on each ticket.

“We need at least ₹3.5 lakh per month for the maintenance of theatres in rural areas and ₹4 lakh in urban areas. With the impact of OTT platforms, occupancy ratio has come down significantly, leading to drop in revenue. This factor made four theatre owners to convert their cinema halls into commercial complexes in Vizianagaram. The government should look into the grievances of the exhibitors since they provide huge employment directly and indirectly,” said Narayanam Srinivas, Vizianagaram Cine Exhibitors Association President.