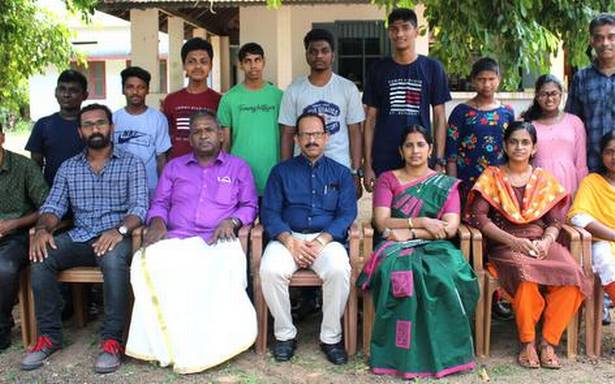 While all the eight students pass, four of them get A+ in every subject

Overcoming many hurdles, students of the Government School for the Blind at Olassa — the lone high school for visually impaired students run by the Kerala government — have cleared this year’s SSLC examinations with flying colours.

What, however, differentiates this success story from others is not how they coped with blindness to score big but how a group of goodwill-driven persons inspired them to breach the limits and script success. From a severe shortage of teaching staff to the barriers of remote learning for children with disabilities, these youngsters had to overcome a set of very unusual challenges this year to achieve the fete.

E.J. Kurian, headmaster, attributes the incredible success primarily to the effort taken by four teacher -volunteers who worked overtime to address the special educational needs of their wards.

“Fresh appointments were not done for the academic year due to the COVID-19 crisis while the scope of remote learning was much limited due to the significant disabilities of our students. Just when these issues began to cast a shadow over the future of our students, these four people, who had earlier worked here in temporary vacancies, came up,” he said.

Since the school hostel remained closed due to COVID-19, the students could only attend the classes from their homes. “To overcome the challenges posed by restricted access to students, we devised a plan to help them do the schoolwork in homes. Accordingly, the children were made to follow the classes in KITE-Victors channel, which were immediately followed up with online classes. The teachers, meanwhile, prepared audio notes and shared them through the common social media account,” explained Mr. Kurien.

A learning process for all

Sheena M.S., one of the teacher-volunteers, said the teachers too had to readjust everything and learned many of the things as the classes progressed. “A reopening of the school, which came four months ahead of the examination, helped us make up for the loss of direct classes. But as students who learn about things through voice and touch, they missed the crucial experimental sessions in science and mathematics,” she recounted.

Buoyed by the success, the school authorities have now approached the Education Department seeking to fill the vacant posts for teachers in the school. “The Parent and Teacher Association has submitted a representation to this effect to the District Development Committee while the Kottyam district panchayat and Minister V.N. Vasavan have offered us all support,” the headmaster said.