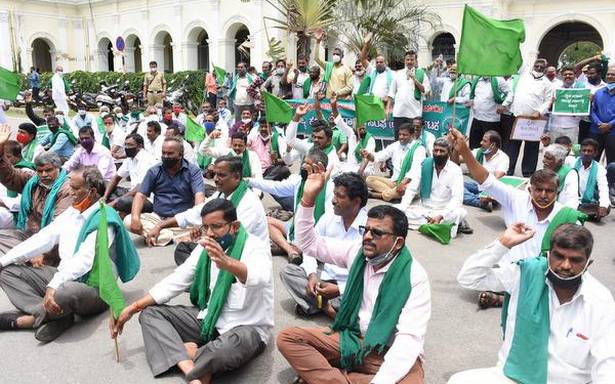 Sugarcane farmers of Karnataka have threatened to lay siege to Vidhana Soudha if the Union government does not revise the Fair and Remunerative Price (FRP) for sugarcane. The threat comes ahead of the Assembly session scheduled to begin on September 13.

The Union government had recently hiked the FRP for sugarcane by ₹50 taking the price to ₹2,900/tonne. However, this is much less than even the cost of cultivation, claims Kuruburu Shanthakumar, president, Karnataka State Sugarcane Growers’ Association.

“The Union government had not revised FRP for sugarcane for three years, keeping it constant of ₹2,850/tonne. Meanwhile, fuel and fertiliser costs have almost doubled. Now, the government has colluded with sugar barons and only increased FRP by ₹50, which is absolutely unacceptable,” he said. The Association has argued that the cost of cultivation is around ₹3,200/tonne.

“The Narendra Modi-led government claims to have implemented the Swaminathan Committee Report and that it will double farmer’s income. These claims ring hollow and are even laughable when the FRP is less than even the cost of cultivation. As per Swaminathan Committee recommendations, FRP would be cultivation cost plus 50% profit for farmers, which will take the amount to ₹4,600/tonne. That is our demand: increase the FRP to include a profit for farmers as well,” Mr. Shantakumar said.

He added that all farmer organisations in Karnataka would support the Bharat Bandh called by Samyukta Kisan Morcha on September 27. “All farmer organisations will soon meet to discuss on the modalities of the protest and bandh, against not only the farm laws but also fuel price hike, inflation and other anti-people policies of the government,” he said.