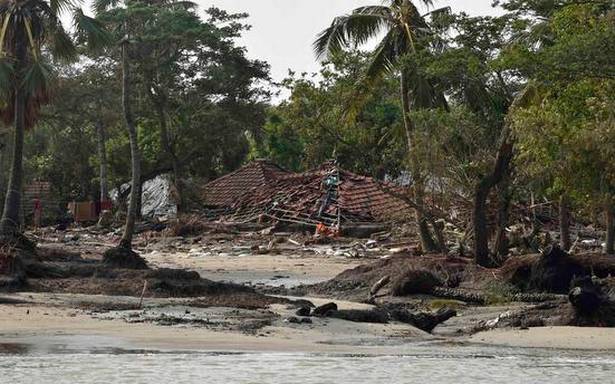 The devastation caused by cyclone Yaas that battered coastal West Bengal in the last week of May was not in terms of loss of life but the huge ingress of saline water which affected thousands of acres of agricultural land. In the past six weeks other than distributing relief and compensating people the West Bengal government has been distributing salt tolerant varities of paddy to farmers.

“We have distributed six such paddy varieties — 1,200 metric tonnes — which are tolerant to high levels of salinity,” said Sampad Ranjan Patra, Director of Agriculture.

The ingress of saline water not only kills standing crops but increases salinity of the soil and makes the cultivation of regular high-yielding varieties almost impossible for the next few years. This may result in food crisis in the region which suffers natural disasters at an increased frequency.

The people of Sunderbans in certain patches however have been trying alternative varieties for quite some time. In Kultali, one of the backward regions there, farmers have been experimenting with several indigenous varieties and are growing Tangrashal and Dudhershor, at a considerable scale now.

This transformation in certain communities has come about owing to the research intervention of TAPESTRY (Transformation as Praxis), a collective of social and environmental scientists, historians and NGOs that has been facilitating the farmers of the ecologically fragile region in trying alternative approaches to agriculture. Several universities in India, Britain, Norway and Japan are part of the consortium.

“So far most of the interventions in the Sunderbans were community based. It can only be transformative and yield results in future when we embrace interventions which are community led and distributed equitably,” Upasona Ghosh, Lead Researcher, TAPESTRY Indian Sundarbans, said. She pointed out that because of the intervention of TAPESTRY, farmers who are facing the impact of increasing climate change events are better prepared and more resilient.

Shibaji Bose, research communication expert working with TAPESTRY, said similar efforts are being made in the Sunderbans falling under Bangladesh. The accumulation and sharing of co-produced trans-boundary local knowledge gained from long-forgotten indigenous practices will provide the much-needed fillip to transformative initiative against climate change impacts.