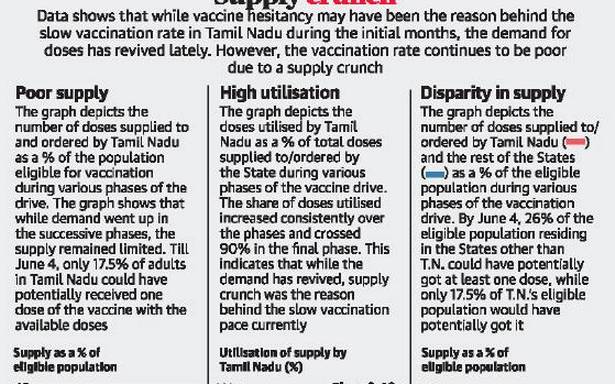 Tamil Nadu has been one of the poorest performing States, only next to Uttar Pradesh and Bihar, in COVID-19 vaccine coverage, with just an estimated 13.8% of its eligible population having received at least one dose of the vaccines, and only 3.6% having taken both. National averages for both measures are 20% and 3.3% respectively.

The State has often attracted criticism for vaccine hesitancy and wastage that were cited for its performance. However, an analysis of the supply of vaccines received by the State government and the doses it has administered clearly proves the State government’s concern off late that limitations in supply and not hesitancy has been standing in its way of inoculating people at a faster rate.

Even as the State sharply improved its utilisation, the supply available to it has slowed down. Importantly, data showed that as a proportion of the population, the vaccine doses supplied to Tamil Nadu by the Centre were significantly lower when compared to the rest of the States put together.

During the first phase of vaccination until February 28, when the drive was open onlt to healthcare workers and frontline workers, the State received 23.77 lakh doses of vaccines and it utilised only 4.6 lakh.

In the second phase from March 1, even when vaccination was opened to all aged over 60 and those with co-morbidities in the 45-plus age group, thereby significantly widening the target population, utilisation did not go beyond three-fourth of the supplied doses. For instance, as on March 31, the State had utilised only 75% of its supplied vaccines.

Since April 1, when the drive opened to everyone aged over 45, utilisation gradually began to increase and stayed around 80%. After the entire 18-plus population became eligible for vaccination on May 1, utilisation went up further. In the past few weeks, utilisation has sharply increased, and as on Sunday, the State has utilised over 95% of vaccines it received from the Centre and through its own channel.

A month-on-month analysis of doses received by the State, meanwhile, showed that the rate of supply did not match the demand. Since May, the number of doses administered, in fact, exceeded supply during the same period.

This shows that while the State government was vaccinating more people by utilising all the supplies it received until and since May, its stocks were not getting replenished at a matching rate.

While the State sourced 13.1 lakh doses of vaccines from its own channels since May, supplies from the Centre during the same period was just 19.7 lakh doses — over 30% lesser than the doses it supplied in April.

The supply of vaccines, as a percentage of the total eligible population during each phase of vaccination also slowed down significantly since May.

Tamil Nadu also stood in stark contrast to all other States put together when vaccine supply is compared to the proportion of population. In the beginning of May, doses received by it accounted for just 12.24% of its eligible population above the age of 18. This improved by just five percentage points, to 17.56%, as on June 4.

Doses received by all other States put together accounted for 18.12% of their total eligible population on May 1, more than six percentage points higher than Tamil Nadu. This further went up by another eight percentage points to 26.29% as on June 4, showing a stark difference between the availability of vaccines for the rest of India and for Tamil Nadu.

(Note: Data used in the analysis includes vaccines received and administered by the State government alone and not private healthcare providers)

(With inputs from Srinivasan Ramani)