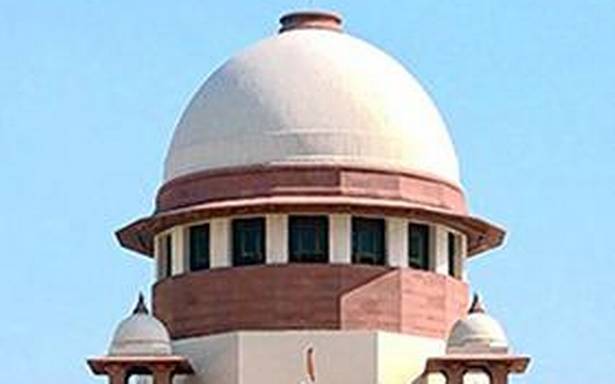 As of now, the list of cases for January 5 shows that a two-judge Bench of Justices Chandrachud and A.S. Bopanna will hear the matter, instead of the 3-judge Bench announced earlier.

The Supreme Court has changed the combination of its Bench hearing the EWS quota case hours after publishing online that a three-judge Special Bench led by Justice D.Y. Chandrachud is scheduled to hear the issue on Wednesday, January 22, 2014.

As of now, the list of cases for January 5 shows that a two-judge Bench of Justices Chandrachud and A.S. Bopanna will hear the matter.

The court had earlier published a list on Tuesday showing that a three-judge ‘Special Bench’ of Justices Chandrachud, Surya Kant and Bopanna would hear the case.

This three-judge combination has been dropped for the numerically lesser Bench of two. Justice Kant is sitting in the Chief Justice of India’s Bench.

On Tuesday, Chief Justice of India N.V. Ramana had agreed to adjust the various combinations of the apex court’s Benches, fixed for the week, to accommodate the case.

The Union government, represented by Solicitor General Tushar Mehta, had been making back-to- back oral mentionings before the Supreme Court, on January 3 and 4, to hear the case quickly, possobly on January 5 itself. The case had anyway been listed on January 6.

Mr. Mehta had however underscored that the NEET counselling was suspended since late November because of the questions raised about the criteria in the EWS quota. Medical admissions are getting delayed, and the issue has to be resolved quickly.

Resident doctors in Delhi had organised a massive protest about the delay in the counselling schedule recently, leading to violence.

Mr. Mehta had submitted to the court on Tuesday that the doctors were rightly agitated about their future prospects.

During the interaction, Chief Justice Ramana had said the court’s Benches were already fixed for the entire opening week of miscellaneous hearings.

But Mr. Mehta had even then persisted that a two-judge Bench led by Justice Chandrachud would be enough to hear the case as long as it was scheduled on Wednesday.

The NEET counselling was suspended after the Union government, on November 25, informed the apex court about its "considered decision" to revisit the "criteria" determining EWS. The government had asked for four weeks’ time to form a review committee, examine the issue and file a report.

The government’s submission had followed rounds of grilling from the court during past hearings to reveal the logic and study before zeroing in on the "exact figure" of ₹8 lakh as the annual income limit to identify EWS of the society.

The Union had formed the review committee comprising Ajay Bhushan Pandey, former finance secretary; Professor V.K. Malhotra, Member Secretary, ICSSR; and Sanjeev Sanyal, Principal Economic Advisor to the Government of India. The committee had submitted its report to the Union on December 31, supporting the ₹8 lakh income threshold as a "reasonable" basis to determine EWS.

"The current gross annual family income limit for EWS of ₹8 lakh or less may be retained. In other words, only those families whose annual income is up to ₹8 Lakh would be eligible to get the benefit of EWS reservation,” the report said.

The committee has maintained that the ₹8-lakh criterion struck a “fine balance” between over-inclusion and inclusion errors.

“The figure ensures that most low-income people who are not required to pay income tax are not excluded and are covered in EWS and at the same time it should not be so high that it becomes over-inclusive by including many incomes tax-paying middle and high income families into EWS," the report said.

The Supreme Court’s query was significant as the One Hundred and Third Constitutional Amendment of 2019, which introduced the 10% EWS quota, is itself under challenge before a larger Bench. The Amendment is under question for making economic criterion as the sole ground for grant of reservation benefits.