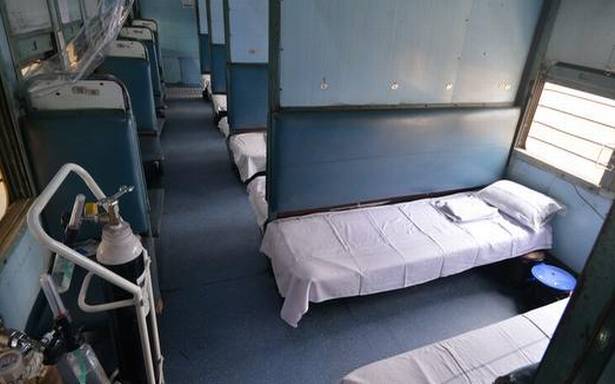 The South Western Railway has reviewed the condition of 320 isolation coaches under its jurisdiction to cope with any emergency in the wake of the daily surge in the COVID-19 cases and the scenario of hospitals running out of beds in the State.

The State has recorded over 19,000 COVID-19 cases in the last 24 hours alone, taking the total number of active cases to over 1.33 lakh and these numbers were increasing by the minute.

Sources in the SWR told The Hindu that out of 320 isolation coaches almost 80 per cent were found fit for immediate deployment in case of any medical emergency and requirement. In case of the remaining coaches it would require minor maintenance work and the authorities were already at it.

The coaches are deployed across the 3 divisions under the SWR and will be used only in case there was a request from the State government. Each coach can accommodate 16 to 18 patients at a time and the coaches have been retrofitted with certain amenities.

Converting coaches to isolation wards was an ingenious solution offered by the Indian Railways to cope with the outbreak of the COVID-19.

The conversion to isolation coaches entailed a few modifications that included removal of middle berths and ladders to ensure better comfort and additional space, provision of plastic transparent air curtains for isolation and screening, providing bottle holders in each compartment for holding medical equipment as well as water bottles, suitable clamping to hold oxygen cylinders etc. Besides these, additional sockets were provided for operating electrical equipment.

Sources said these coaches have been berthed in different parts of the State and could be hauled for deployment at the nearest station if required.

Though the railways were ready with the isolation coaches last year, they were never utilised given the high rate of recovery and the steady drop in number of active cases after September. Also, additional isolation facilities were created by taking over hotels, hostels and guest houses while home isolation was recommended for people who were asymptomatic.

Consequently, the isolation coaches were earmarked for reconversion into freight containers. But there is a perception that these coaches may be required following the surge in fresh cases in the second wave.