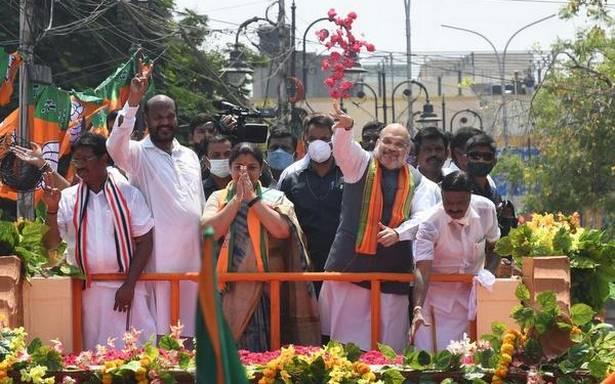 “Only the BJP and AIADMK governments can safeguard fishermen, women, unemployed youth and people who believe in culture and tradition,” the Union Home Minister said

Union Home Minister Amit Shah said the development of Tamil Nadu could happen only when the corruption and dynastic politics of the DMK and Congress were eliminated.

Mr. Shah said that whatever development has happened under Prime Minister Narendra Modi’s rule across the country, must come to Tamil Nadu too so that the dream of late Chief Ministers M.G. Ramachandran and Jayalalithaa could come to fruition.

The Home Minister was speaking to the media after leading a roadshow in Teynampet for less than half a kilometre for the party’s Thousand Lights candidate, Khushbu Sundar,

While Ms. Khushbu asked voters to ensure the return of “Amma’s rule” and to bring the development schemes of PM Modi to Tamil Nadu, Mr. Shah did not speak during the rally.

“Only the BJP and AIADMK governments can safeguard fishermen, women, unemployed youth and people who believe in culture and tradition,” he told reporters after the short rally. Lauding Chief Minister Edappadi K. Palaniswami and Deputy Chief Minister O. Panneerselvam for taking Tamil Nadu on the path of development, he said they had worked aggressively to stop the spread of COVID-19 in the State. He appealed to voters in Tamil Nadu to bring in a double engine growth to the State by voting for the BJP-AIADMK alliance. He also appealed to the voters to ensure a massive majority for the alliance.

Mr. Shah said voters of the Thousand Lights constituency need to vote for Ms. Khushbu as she would take care of the constituency and its people very well.