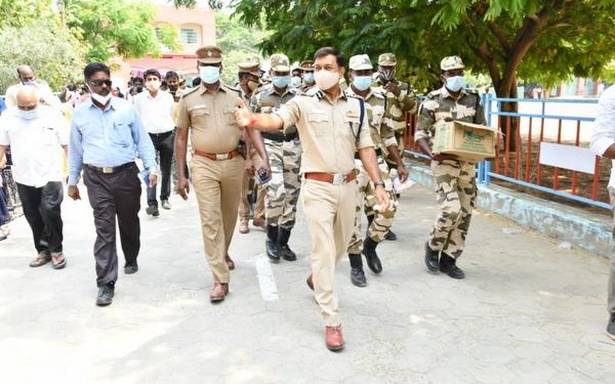 Polling was largely peaceful in Chennai, across constituencies, on Tuesday. City police commissioner Mahesh Kumar Aggarwal was seen visiting sensitive areas and issuing instructions to police personnel on the ground, to ensure the smooth conduct of polls.

Mr. Aggarwal, accompanied by a striking force of police personnel began his inspection immediately after polling started in the city. First, he visited polling stations in thickly-populated areas such as Royapuram and Harbour. Later, the Commissioner inspected St. George Anglo Indian School where a large number of voters had gathered to cast their votes. He asked poll officials and police officials who were on duty whether there was any laxity in the arrangements and ordered police officials to regulate the crowd to ensure peaceful polling.

Mr. Aggarwal told The Hindu, “We have made elaborate arrangements across the city. All norms of the Election Commission are strictly followed. No untoward incident has been reported so far. Polling was largely peaceful without any incident.”

The Commissioner also distributed refreshments to police personnel who were on duty and handed over masks to those who were found not wearing one.

While visiting another polling booth on Avvai Shanmugam Salai, he asked police personnel to remove the car of a political party functionary parked near the premises in violation of poll norms. Similarly he gave instructions to detail another vehicle in Royapuram.

While on Avvai Shanmugam Salai, he saw a few political party cadre gathered in large numbers near a polling station and ordered police officers to disperse them from there. At another point on Santhome High Road, he personally instructed the striking force to chase people who were loitering in large numbers. At Santhome Higher Secondary School, he asked health staff to strictly follow all guidelines to check the voters and officials while allowing them inside. At Rani Meyammai School on R.K.Mutt Road, he checked that all security arrangements were in place.