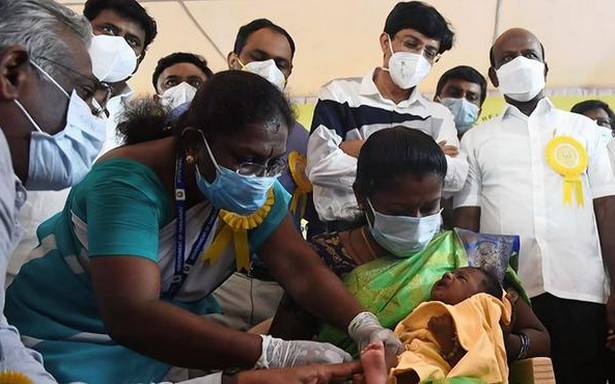 It will protect them against pneumonia and meningitis

Tamil Nadu rolled out the pneumococcal conjugate vaccine under the Universal Immunisation Programme on Tuesday. This will benefit 9,23,000 children every year in the State.

Launching the vaccine at the Urban Primary Health Centre in Poonamallee, Minister for Medical and Family Welfare Ma. Subramanian said currently, nine vaccines, including those for protection against hepatitis B, polio, diphtheria, whooping cough, rotavirus, measles and rubella, were in use for children in the State.

The Minister added that pneumococcal conjugate vaccine was already rolled out in 21 States and was in use for the last two years. It would protect children against pneumonia and meningitis.

Speaking to reporters, he alleged that the AIADMK government did not show interest in rolling out the vaccine. It would be administered at six weeks and 10 weeks with a booster dose at nine months of age.

“In the private sector, one dose of this vaccine costs ₹4,000. The State government will spend ₹12,000 for three doses of the vaccine for the children. The vaccine will be administered ffor ree,” he said.

The vaccine would prevent deaths due to pneumonia and meningitis. He said mothers would receive the handbook for vaccination and would get reminders from the Health Department through SMS or WhatsApp for the remaining doses.

On COVID-19 vaccines, he said according to information obtained under the Right to Information Act two months ago, nearly 8.3% vaccines were wasted earlier. “We have overcome the vaccine wastage, and have achieved better utilisation through the efforts of doctors and nurses,” he said.

He said that another 1 lakh doses of Covaxin and 1.5 lakh doses of Covishield were expected to reach the city. “Covaxin will be administered on priority basis for those who have received their first dose,” he said.

Mr. Subramanian, along with the Health Secretary, is scheduled to meet the Union Health Minister on Thursday in Delhi. Among the issues to be discussed are increased supply of COVID-19 vaccines and admission process in the 11 new government medical colleges.