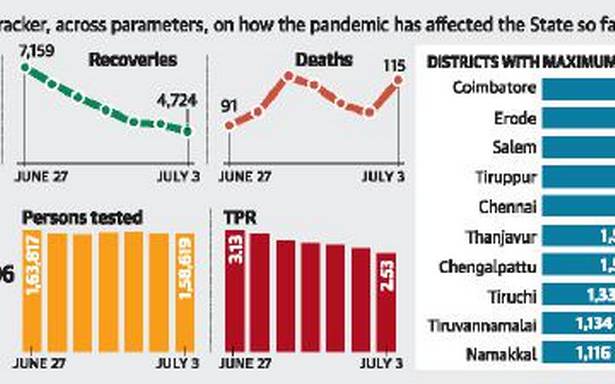 Tamil Nadu reported 4,013 fresh cases of COVID-19 on Saturday, registering a positivity rate of 2.5%, with 115 persons dying of the infection.

In Chennai, 227 persons tested positive for the infection while the number of fatalities stood at 20. A number of deaths that had occurred at homes in the city were included in Saturday’s bulletin. The city’s tally reached 5,33,224 while the toll stood at 8,217 till date.

Five other five districts had 100-plus cases — Chengalpattu (188), Tiruchi (170), Tiruvannamalai (161), Namakkal (118) and Tiruvallur (102). There have been fluctuations in daily cases in Tiruvannamalai in the last few days. Twenty-seven districts had daily case tally of less than 100 cases each. The number of active cases further dipped to 35,881, with Erode accounting for 4,260 patients followed by Coimbatore (2,996) and Chennai (2,446). A total of 4,724 persons were discharged after treatment, taking the total number of people discharged so far to 24,23,606.

Thanjavur registered 26 deaths due to COVID-19. A majority of these deaths had occurred earlier — as the bulletin noted that the fatalities included deferred reconciled death reports received from the district related to earlier days. The deaths of 14 persons at home were included in Saturday’s bulletin.

Of the 115 persons who died, 98 had co-morbidities. This included a 21-year-old man from Tiruvannamalai who had acute lymphocytic leukemia. He was admitted to a private hospital in Tiruvallur with complaints of cough for two days, and died on July 2 due to COVID-19 pneumonia.