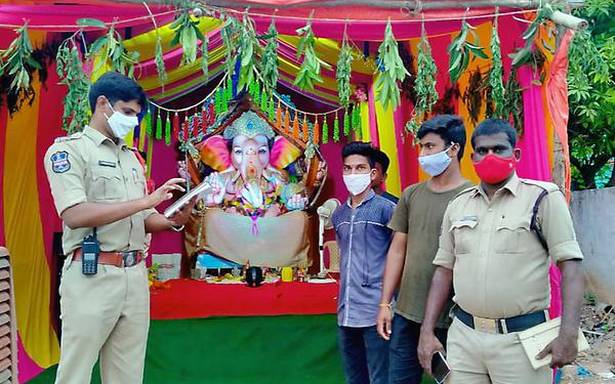 To ensure law and order and facilitate smooth proceedings during the nine-day Ganesh festivities, Nalgonda police have added a dimension of technology to the celebrations.

Starting Saturday, all the Ganesh idols and the permitted locations in the district will be under police surveillance. And for the purpose, all the pandals have been geo-tagged.

The process began right from the stage of online applications to installing idols. Officials based on permitted applications visited some sites and allotted specific numbers, which embeds all the required information such as the route map to it and organisers’ details.

The whole process enables police personnel, wherever present, to approach any untoward situation quickly and neutralise.

In addition to geo-tagging the pandals, patrol personnel and other units were also bound by global positioning system on their vehicles and by online ‘point book’, which mandates personal visits to the site, making note of situations and updating them on the tablet.

The range of technology, as a result, leaves digital print of the personnel’s every movement which can also be verified from the command control centre at the district police office.

According to officials, nearly 2000 Ganesh idol installations have been permitted in the district. The geo-tagged metadata of each pandal would be erased at the conclusion of festivities after the idol is immersed.