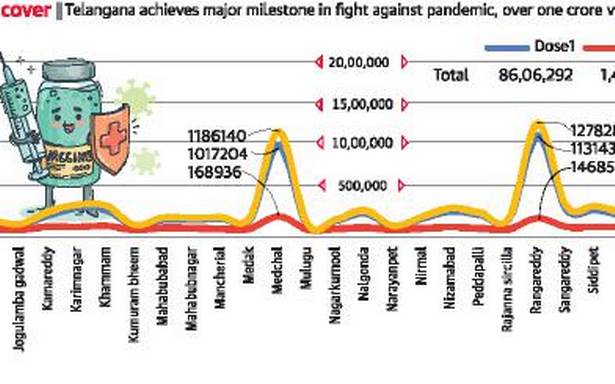 With Telangana crossing the 1 crore COVID–19 vaccination doses mark on Friday, Chief Secretary Somesh Kumar said that the State could do this on account of its strategic approach, and emphasised that a larger number of people can be vaccinated once more doses are made available.

Describing the day as a ‘red letter day’, the Chief Secretary said that as a part of its strategy adopted by the State, high risk groups and superspreaders were vaccinated first. They numbered around 26 lakh. He said that those under this group were prone to coming in contact with a large number of people, and that vaccinating one person was akin to saving many people.

Mr. Kumar said that around 2 lakh persons are being vaccinated everyday and added that this number could be increased to 7 lakh to 8 lakh if the number of doses the State gets increases. He also opined that the State had issued global tenders but was unsuccessful on this front.