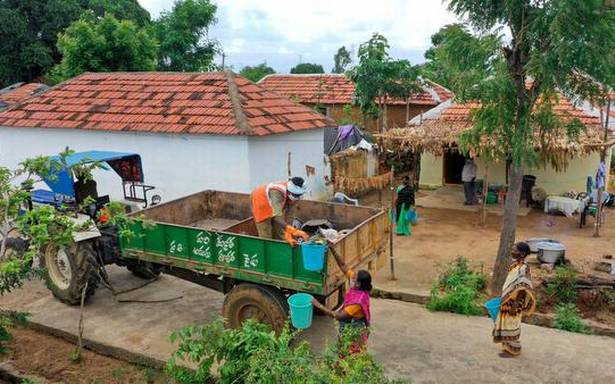 Once again, Telangana stood first in the country in the list of highest number of open defecation free (ODF Plus) villages under the Swachh Bharat Mission (Grameen) Phase-II programme till December 31, 2021.

The State government has enacted a new Telangana Panchayat Raj Act to ensure holistic development of villages. A secretary has been posted in every panchayat for smooth execution of welfare programmes, close monitoring, digital reporting and to ensure prevalence of good governance in villages. Multi-purpose workers have been appointed to maintain proper sanitation in villages.

Apart from this, the government has stressed on garbage collection and scientific disposal. Garbage bins have been distributed to all households as part of solid waste management. It has also provided dedicated tractor trolleys with partitions to collect dry and wet waste and transport the garbage to segregation-cum-compost sheds.

There are 12,769 dedicated compost sheds in all gram panchayats. Tankers have also been provided to water the plants for greenery in villages.

Sanitation drives have often been carried out through the Palle Pragathi programme in villages. Vermicompost made out of wet litter is given to plants in the green belt of villages as manure. Also, magic soak pits and drainage facilities have been arranged in all houses for proper liquid waste management.

“The implementation of Palle Pragathi programme for holistic development of villages is being uploaded on SBM (G) 2.0 mobile app, which gets reported at the national level dashboard. Telangana State, as per the SBM (Grameen) phase-II dashboard, became numero uno in India by declaring the highest number of ODF villages,” commissioner of Panchayat Raj and Rural Development A. Sharath told The Hindu.