What made the police team suspicious was that some men, dressed in dhotis like DMK leaders, walked around alone and did not raise any slogans when the rest of the crowd did.

It was a text message from under the bed that did them in. The message just said “come” and was sent by a Chennai Police officer who was searching the hideout of three suspected pickpockets when they returned. The officer hid under the bed, overheard the conversation of the pickpockets and texted a team waiting outside.

Minutes later, the Chennai Police had arrested three members of a gang that targeted DMK supporters and the public gathered outside the Kauvery Hospital, where DMK president M Karunanidhi is being treated since Friday. Hundreds have stayed on the road at the hospital since then often chanting slogans and wishes for ‘Kalaignar’.

On questioning the three, police found that a gang of men — wearing dhotis and coordinating on WhatsApp — had targeted crowds outside the hospital for four days. In the end, police announced they had made 14 arrests, including the alleged kingpin and recovered several stolen wallets and mobile phones. The same gang was allegedly involved in similar thefts in November and December 2016, when late chief minister J Jayalalithaa was admitted to Apollo Hospital.

According to a senior police officer who coordinated the operation, police started receiving complaints on Sunday. “We formed a team of six officers trained to probe such crimes. Most complaints were about losing cell phones and wallets. On Monday, six officers in plain clothes were deployed at the hospital and they narrowed it down to three suspects,” he said.

What made the police team suspicious was that some men, dressed in dhotis like DMK leaders, walked around alone and did not raise any slogans when the rest of the crowd did. 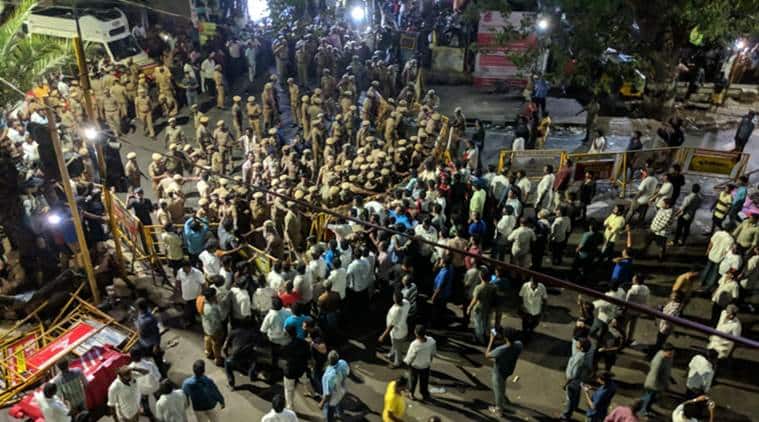 Around noon on Monday, the three suspects left and four officers followed them to a lodge in Koyambedu some 10 km away. Sources said that the suspects entered a room and left again without locking the door. One of the officers entered the lodge to search the room.

“But the three returned soon and our officer managed to hide under the bed. He overheard their conversations and noted other details and texted his colleagues who were waiting outside. Immediately, a police patrol team was called and they raided the room. All three were arrested,” an officer said.

After recovering several phones and 10 wallets from the room, questioning the three suspects led police to the alleged kingpin, Amir Basha (51), a native of Dindigul. Police then waited for the others to return to their rooms late in the evening, and another 11, including Basha, were arrested.

“SIM cards in all cellphones were missing. Other than Basha, Arumugam (43) from Trichy, Annadurai (31), Jeevarathinam (55), Manikandan (32) from Vellore were among the major arrests on Monday night. Basha always waited in the room and coordinated the operation. He never went out and only coordinated with the others on a WhatsApp group,” a senior police officer said. He also said the gang worked in teams of five and were each paid Rs 1,000 a day.

A K Viswanathan, Chennai Police Commissioner, told The Indian Express: “There were similar cases in the past but I am happy that we arrested them immediately because their strategies and style of functioning were surprising.”