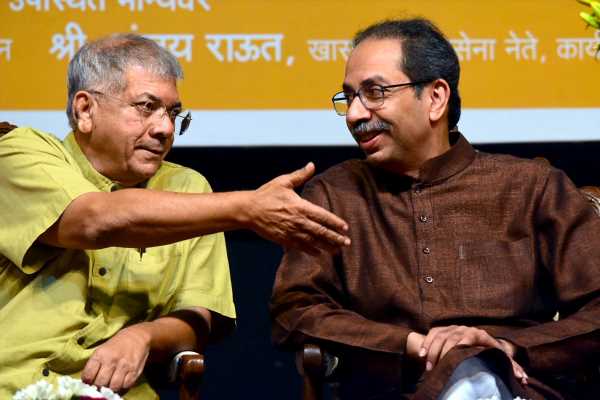 ‘The Shiv Sena and the Ambedkarites are two powerful social forces in Maharashtra with a presence in the toiling classes. However, they were made to fight each other by the powers that be. Now, they are joining hands while overcoming this contentious past.’ 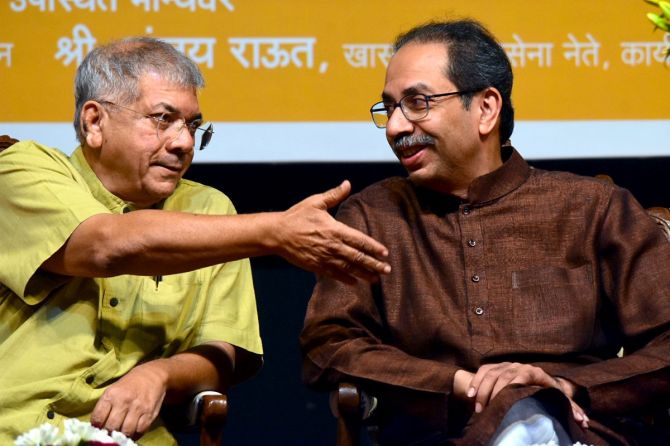 This looked like just another event: Where a portal on the works of “Prabodhankar” Keshav Sitaram Thackeray, among the foremost social reformers of Maharashtra, was re-launched.

This has stirred the already turbid waters in the state, considering the possibility of a new political coalition that may arise out of this outreach between the two.

Ambedkar is a former Lok Sabha MP and the grandson of Babasaheb Ambedkar, who, along with Prabodhankar, was the doyen of the non-Brahmin movement and collaborator in causes like the launch of the Navratri Utsav (1926) to counter the Brahmin-dominated Ganesh Utsav.

The Shiv Sena is smarting from a vertical split that saw Chief Minister Eknath Shinde walk off with 39 other legislators to join hands with the Bharatiya Janata Party (BJP) and dislodge the Thackeray-led Maha Vikas Aghadi (MVA) coalition government.

Thackeray’s Shiv Sena (Uddhav Balasaheb Thackeray) and Shinde’s Balasahebanchi Shiv Sena are battling it out over the legacy of the late Shiv Sena supremo Bal Thackeray.

The bellwether municipal elections, including those to the cash-rich Mumbai civic body, which the Shiv Sena has controlled for 25 years, are due to be held early next year, and Thackeray needs more allies on his side apart from the Congress and Nationalist Congress Party (NCP).

As Shiv Sena leaders note, it is here that an alliance between the grandsons of the two icons may work to their mutual advantage a century on.

Unlike other leaders of the Republican Party of India (RPI), who have pockets of support largely among the Buddhist Dalits, who form around 7 per cent of the population, Ambedkar has a base across sections like the Hindu Dalits (Maharashtra has 59 Scheduled Castes), smaller Other Backward Classes (OBCs), Muslims and urban, educated Dalits.

Much before the term “social engineering” entered the lexicon, Ambedkar brought together diverse social forces in a rainbow coalition at Kinvat in Nanded in the 1990s. He has a base in the demographically diverse Akola district in Vidarbha, which he represented twice in the Lok Sabha (1998 and 1999).

“We are ready for a political alliance (with the Shiv Sena),” said Prakash Ambedkar. “But it is for Uddhav Thackeray to make up his mind on whether he wants to take us into the MVA or go in for a (solo) alliance with us. Till then, alliance talks cannot proceed,” he said.

A senior Shiv Sena leader said the party was ready for an alliance with the VBA.

“Our doors are open … we must strike new alliances. Ambedkar has a pan-Maharashtra base. They had upset the calculations in the 2019 Lok Sabha elections,” he noted, referring to how the VBA, which had contested in an alliance with the All India Majlis E Ittehadul Muslimeen (AIMIM), was blamed for the defeat of the Congress and NCP in eight seats by walking away with anti-incumbency votes.

Shiv Sena leader and former minister Anil Parab said: “The grandsons of two icons had come together. They can also strike a political alliance in the future.”

This is Thackeray’s second major overture to the Dalits in two decades. In 2003, Thackeray, who had just been anointed working president of the Shiv Sena, had reached out to the Buddhist Dalits, especially those who supported the various factions of the RPI. That met with limited success.

This ‘Shivshakti-Bhimshakti’ initiative was noteworthy as the Shiv Sena had a bristling relationship with the Buddhist Dalits, who are the most militant section of the Dalit community.

The Shiv Sena has crossed swords with Buddhist Dalits, like in the 1974 riots in Mumbai and the renaming of the Marathwada University at Aurangabad after Dr Babasaheb Ambedkar.

The Sena also protested the Maharashtra government’s decision to print Ambedkar’s book Riddles in Hinduism with its controversial references to Hindu deities (1987). The Shiv Sena used this animosity to expand among the Marathas, intermediate castes, and Hindu Dalits, who are socially and politically at odds with the Buddhist Dalits.

“The Shiv Sena and the Ambedkarites are two powerful social forces in Maharashtra with a presence in the toiling classes. However, they were made to fight each other by the powers that be. Now, they are joining hands while overcoming this contentious past,” said senior journalist Sachin Parab, who is editor of prabodhankar.com, which was relaunched by Thackeray and Ambedkar.

Senior journalist and political analyst Hemant Desai noted that Thackeray was trying to reclaim his grandfather’s legacy of “Bahujan Hindutva” or subaltern Hindutva by allying with forces like the anti-Brahmin Sambhaji Brigade and now the VBA. This was an attempt to distinguish the Sena’s brand of Hindutva as distinct from the Brahmanical, upper-caste Hindutva as seen as being espoused by the BJP and the Sangh Parivar.

Congress General Secretary Sachin Sawant said: “There has been no discussion so far within the MVA on this proposal.”