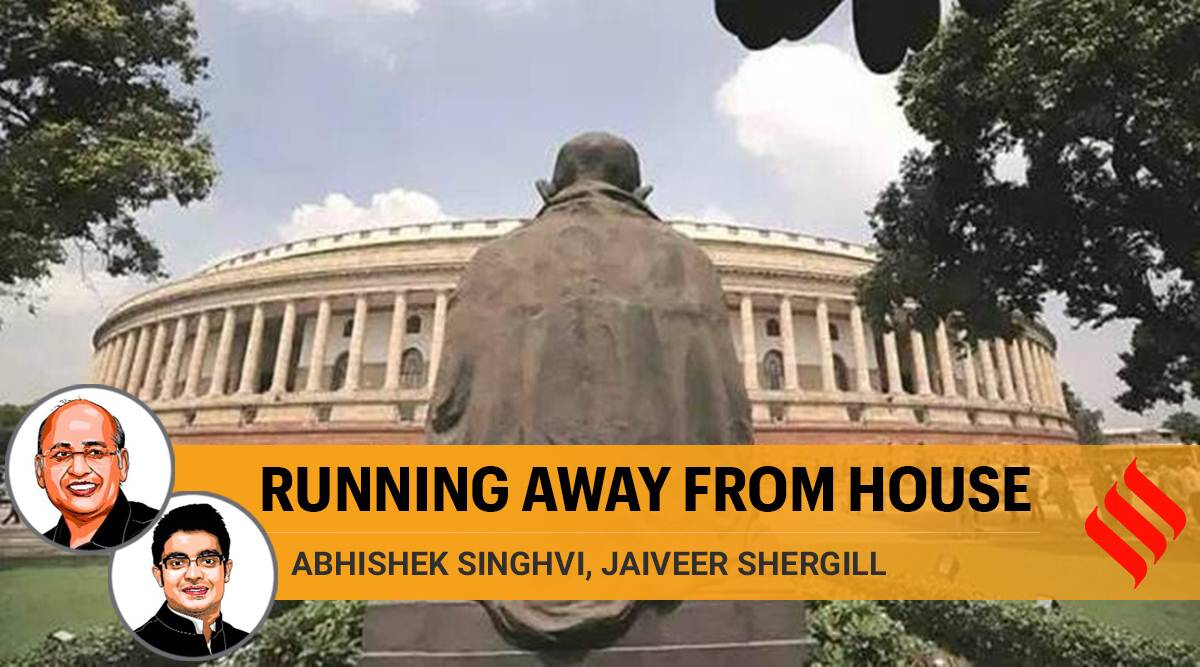 The BJP’s undermining of Parliament has a long legacy in its relatively short life as a ruling party. Its policies and actions have frequently been antithetical to Parliamentary democracy. 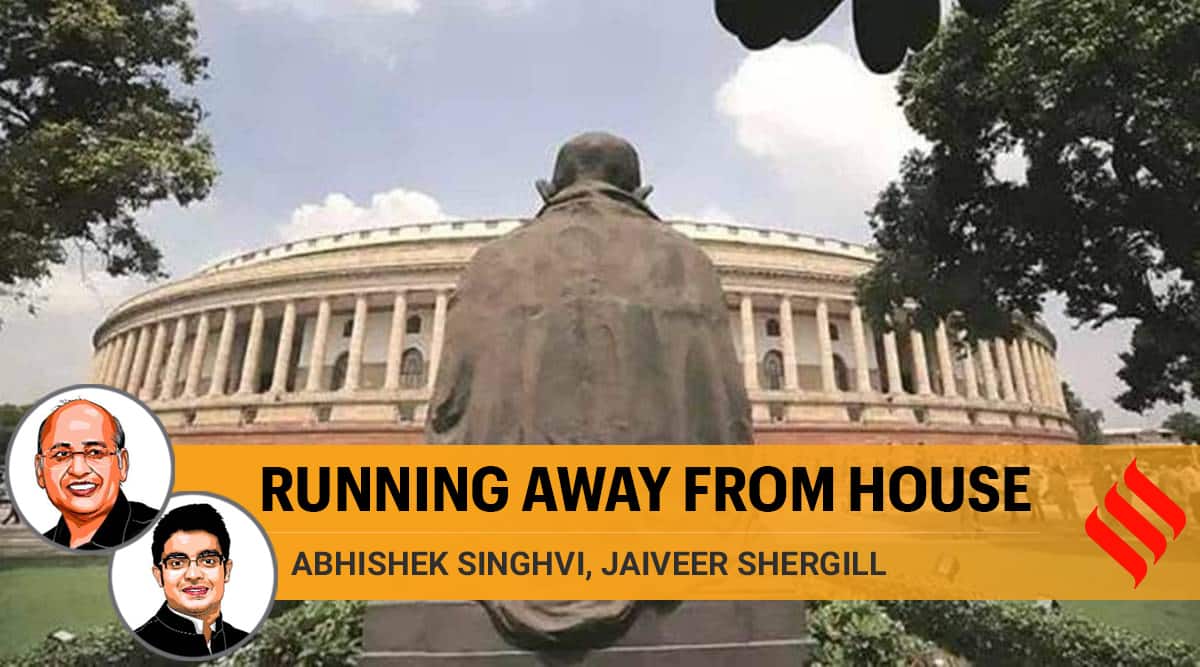 While deprecating the separation of “a place from its history”, novelist Alan Moore rightly said: “A place is much more than the bricks and mortar that go into its construction. I think it’s more than the accidental topography of the ground it stands on.” With the apex court giving its stamp of approval to the Rs 2,000 crore Central Vista project — it includes a glittering new Parliament to be built at a cost of Rs 971 crore — an analysis of the Narendra Modi government’s track record on respecting Parliament’s soul and substance is relevant. Has the BJP and the Modi government imbibed the true spirit of our temple of democracy or have they treated it as a necessary evil, to be formally bowed down to while increasingly marginalising it?

During last year’s budget session, Parliament was allowed to work despite the COVID-19 outbreak because the MP Assembly had to be summoned for the formation of a BJP government against the popular mandate. A full-fledged monsoon session was convened when the virus was at its peak in Delhi because anti-farmer ordinances had to be ratified. Almost all states had their Assembly sessions during the pandemic, exposing the COVID-19 excuse for curtailing Parliament as the fig leaf it was. But when farmers, not allowing the winter to dampen their resolve, sit on roads demanding restoration of MSP for their produce, the winter session of Parliament becomes dispensable. If Parliament is not allowed to become the appropriate forum for the consideration of demands that affect nearly two-thirds of the country’s population, it can hardly qualify as democracy’s heartbeat, one that was Nehru’s priority, the subject of former PM Atal Bihari Vajpayee’s undying respect and, indeed, PM Modi’s floor-kissing obeisance, when he first entered its hallowed portal.

Perhaps, BJP’s social and political agendas take precedence over such democratic pillars. In 2017, the winter session was delayed because of the Gujarat Assembly elections. Since the government is currently investing all its energy in election management in West Bengal, Tamil Nadu, Assam and Puducherry, it has no time for Parliament. Political priorities seem to have replaced constitutional propriety. The government is fully aware that people across the country are agitated. Therefore, despite the pendency of many important pieces of legislations — the Personal Data Protection Bill, 2019, Dam Safety Bill, 2019, Medical Termination of Pregnancy Amendment Bill, 2020, Anti-Maritime Piracy Bill, 2019, Maintenance and Welfare of Parents and Senior Citizens Bill, 2019 — the winter session has been guillotined.

The BJP’s undermining of Parliament has a long legacy in its relatively short life as a ruling party. Its policies and actions have frequently been antithetical to Parliamentary democracy. In Opposition, its disruption of parliamentary proceedings and blockage of legislations was elevated to a fine art — remember the vigorous defence of disruption as a legitimate democratic tool by the late Arun Jaitley. During the 2013 budget session, of the 163 hours available, 146 hours were lost due to disruptions by the BJP.

Since 2014, there have been more subtle stratagems to undermine Parliament. Ordinance, as the preferred legislative route, is being misused as a constitutional tool and Parliament is increasingly ceasing to be a place for debates. Important bills are moved and passed on the same day or rushed through, thus depriving members of their parliamentary rights to contribute effectively. During the 2018-19 budget, 100 per cent of the demands for grants were passed without discussion. The Farm Bills’ passage was the apogee of all brazen violations and subterfuges.

Parliament has an effective committee system and new bills introduced in the House are generally referred to department-related standing committees for detailed scrutiny. Having been privileged to chair such a committee, one of us (Singhvi) can testify to their sterling non-partisan contributions. Invited domain experts also scrutinise the bills. In the 14thand 15th Lok Sabhas, 60 per cent and 71 per cent bills, respectively, were referred to such committees, whereas in the 16th Lok Sabha, only 25 per cent bills were referred. Not a single bill has been referred to committees in 2020.

Accountability and scrutiny have unfortunately been perceived as irritants by the Modi government. Subversion of the constitutional spirit was evident when the Aadhaar Bill was certified as a Money Bill. Having nothing to do with the imposition, abolition or alteration of taxes nor with financial obligations of the government, it was so certified simply to avoid Rajya Sabha scrutiny. That issue is now pending before a larger apex court bench, but judicial delays are inevitably used to bypass Parliament. During the last monsoon session, the Question Hour was suspended to avoid legislative scrutiny. If every other business could be transacted in both the Houses, there was no plausible reason to suspend the Question Hour— except avoiding processes designed to hold the government to account.

The Modi government’s decision to freeze the entire MPLAD funds scheme was less about economics or welfare and much more about politics. The impact was disproportionately larger on Opposition MPs who, being out of power, will have no say in any development work in his/her area. Despite marginal aberrations and abuses, the MPLAD scheme, to the co-author’s (Singhvi) knowledge as a three term MP, has surpassed all expectations at the grassroots. Meanwhile, there is the unaudited PM Care Fund to take care of the ruling dispensation. Hopefully, the new Central Vista will signify a more meaningful realisation of the true ethos and pulsating spirit of Parliamentary democracy and not merely creation of brick, mortar and concrete structures.

This article first appeared in the print edition on January 14, 2021 under the title ‘Running away from House’. Singhvi is a three-term sitting MP, former chairman, Parliamentary Standing Committee and senior national spokesperson, Congress; Shergill is a Supreme Court lawyer and national spokesperson, INC. Views are personal