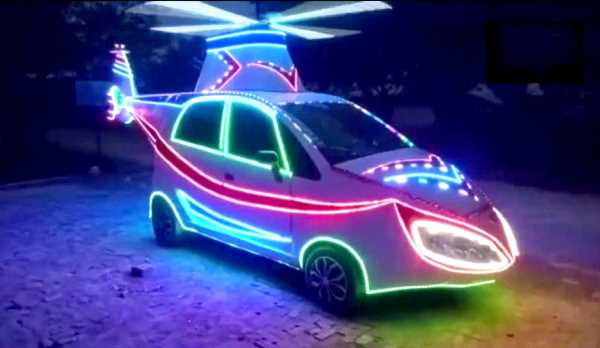 When scrap turns gorgeous… That’s exactly what happened when a group of 15 artistes turned waste material into a magnificent Rudra Veena.

The Top Videos of the Week, listed by Shailajanand Mishra.

How children learn about animals, the real way.

And why we should salute the BRO.

Videos chosen by you through your likes on iShare.

Is that the world’s biggest Rudra Veena?
Location: Bhopal

A group of 15 artistes, he says, has spent around Rs 10 lakh to create what they claim is the world’s ‘biggest Rudra Veena’.

Is this the IAF’s most important air show?
Location: Hyderabad

Your shoulders are guaranteed to lift with pride as you watch the combined graduation parade of the Indian Air Force.

The parade, which marks the successful completion of the pre-commissioning training of flight cadets across various branches of the IAF, was held at the Air Force Academy in Hyderabad.

In a first, the ceremony had a foreign service chief as the chief guest and reviewing officer; Air Chief Marshal Shaikh Abdul Hannan, chief of air staff, Bangladesh Air Force, conferred the ‘President’s Commission’ on the graduating trainees.

At an altitude above 13,000 feet in Arunachal Pradesh, work is on in full swing.

The Border Roads Organisation, which is in charge of this project, is constructing a bi-lane road tunnel that promises to provide all-weather connectivity between Tawang in Arunachal and Guwahati in Assam.

The Sela Pass will comprise two tunnels that are coming up through two ridges west of Sela. It also includes the construction of two roads, measuring 7 km and 1.3 km.

And here’s why it will be a gamechanger.

The Border Roads Organisation, meanwhile, is busy with yet another project in Arunachal Pradesh.

To counter China’s aggressive behaviour near the LAC, India is developing infrastructure in the area. This includes a road network that will connect the border villages in Arunachal.

How these students learn about wildlife
Location: Nashik

What’s the best way to learn about animals? Reading about them or spending time with them?

Nashik’s Espalier Heritage School felt the answer was a no-brainer.

So this is what they did.

The Nano that became a helicopter
Location: Azamgarh

It’s a helicopter that runs on the road. And it’s the brainchild of Azamgarh carpenter Salman.

“It took me around four months and cost about Rs 3 lakh,” says Salman. “There is high demand for it now.”

Known for their elite combat capabilities and multi-tasking abilities, the Indian Air Force’s special unit Garud Commando Force has been deployed in high-altitude positions along the China border since May 2020.

The Garuds have already proven their mettle in anti-terrorist operations in the Kashmir Valley and are specialised in handling hostile rescue situations and suppressing the enemy’s air defence.

While 26 women drivers were hired by the Uttar Pradesh State Road Transport Corporation, it is Priyanka Sharma who has become the state’s first government bus driver.

Sharing her life’s struggles, she says her husband, who was an alcoholic, passed away early in their marriage, leaving her with the responsibility of raising their two children.

She hopes her new job will help her carve a bright future for them.