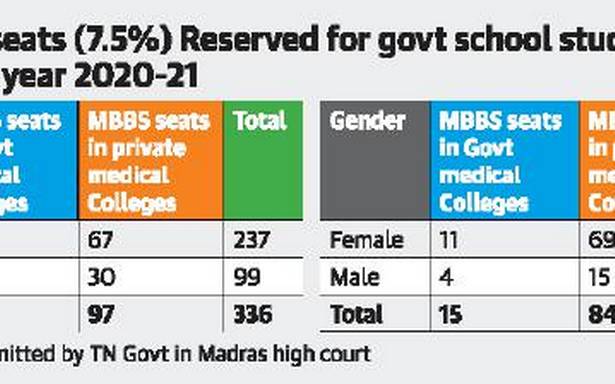 As the State awaits the High Court judgment on a case that challenges the 7.5% reservation for government school students within NEET, here’s the rationale which successive governments have relied upon to make a strong case for affirmative action in medical admissions

When two similar Bills passed during the All India Anna Dravida Munnetra Kazhagam regime failed to receive assent, the Assembly came up with a law in October 2020 to provide 7.5% horizontal reservation to government school students in medical admissions. Now, this State law is being challenged before the Madras High Court and the incumbent Dravida Munnetra Kazhagam government has filed an exhaustive counter affidavit defending the law.

The government has relied heavily upon a report submitted by a Commission constituted under the chairmanship of former Madras High Court judge P. Kalaiyarasan to substantiate its argument that the number of government school students gaining admission in medical colleges had dropped ever since the introduction of NEET in 2017, and therefore, there was an imminent necessity to ensure a level playing field for these students.

The Justice P. Kalaiyarasan Commission had concluded that government school students were placed at a disadvantageous position compared to private school counterparts due to a ‘cognitive gap’ created by socio-economic factors such as caste, wealth, parental occupation, gender and so on, and that these psychological and socio-economic barriers could not be bridged by a few months of intensive coaching for NEET even if it was provided free of cost.

The Commission was of the opinion that though the State Government runs more than 30,000 schools, the students of these schools do not gain admissions in professional courses in big numbers. Unlike the pre-NEET era when medical admissions were made based on Plus Two marks, the number of government school students who had gained admission in medical colleges had fallen to single digits — three, five and six in the academic years 2017-18, 2018-19 and 2019-2020 respectively.

Providing a top-down view of how students from different types of schools had succeeded in gaining medical admissions, the Commission stated that the number of government school students who had enrolled in the MBBS course reduced from 38 in 2014-15 to just six in 2019-2020. On the other hand, the number of CBSE students who had gained admission jumped from just two in 2014-15 to 1,368 in 2019-20 because of NEET.

“Government school students secured about 1% of MBBS seats before NEET, and this has dropped to an abysmal 0.1% now,” the Commission’s report read. However, after the implementation of the law currently under challenge, as many as 435 out of 5,567 undergraduate medical and dental seats in the State were reserved for government school students in the academic year 2020-21, the State told the court.

It has also highlighted how the Commission had concluded that the ‘cognitive gap’ between government school students and others was not due to lack of intelligence but because of a lack of opportunities to develop and become capable of competing with others.

The Commission had found that even between the government school and government-aided private school students, the latter had performed better than the former when it came to securing medical admissions.

Opposing the batch of cases, the government has contended before the court that the Tamil Nadu Admissions to Undergraduate Courses in Medicine, Dentistry, Indian Medicine and Homeopathy on Preferential Basis to Students of Government Schools Act of 2020 was passed only after conducting an empirical and scientific study and extensive deliberations in order to ensure equalisation of educational opportunities by providing a push for government school students.

The Justice P. Kalaiyarasan Commission was constituted on March 21, 2020, and its report was submitted to the government on June 8, 2020. Thereafter, the Cabinet deliberated upon the report on June 15 and July 14 last year. “This is a policy decision of the government and is not ordinarily to be interfered with unless it is found to be capricious, non-informed by reasons, arbitrary or in violation of Article 14 (right to equality) of the Constitution,” the government said.

Though private school students contended that the Act falls foul of Article 14 as it was discriminatory, the government replied that “the concept of equality does not prohibit reasonable classification to be made, which should be on the basis of intelligible differentia and must have a rational nexus to the object sought to be achieved by the legislation. It is submitted that the respondent (government) has satisfied the above mentioned twin test.”

It said the Justice P. Kalaiyarasan Commission had highlighted how government school students form a separate class unto themselves, and thus are entitled to a reasonable percentage of medical seats on a preferential basis.

The government also relied upon a 2012 Supreme Court verdict to point out that while upholding a provision of the Right of Children to Free and Compulsory Education (RTE) Act of 2009, the top court itself had acknowledged the inability of government school students to perform well.

Stating that the objective behind the 2020 Act was to bridge the inequalities between government and private school students and take affirmative action to bring real equality between the two by giving them an equal chance to become medical professionals, the government said: “In view of the above, it is submitted that there is an intelligible differentia between two classes of students and reasonable nexus of such a classification with the object sought to be achieved.”

It was also stressed that medical seats have been reserved only for those who had studied from Class VI to XII in government, corporation, municipal, Adi Dravidar and tribal welfare, Kallar reclamation, Forest Department and other schools managed by government departments. Students of government-aided private schools were consciously excluded on the basis of the Commission’s report that they were comparatively better placed.

Explaining the reason for not including students of the Central Government schools under the ambit of reservation, the court was told that schools such as Kendriya Vidyalaya could not be equated with State Government schools since the former comprises those from better social and economic backgrounds.

“The attempt by some of the writ petitioners to compare a daily wage labourer with a Central Government employee is preposterous,” the government said.

Further, denying that the 7.5% reservation was repugnant to the object sought to be achieved by NEET, the State said the law under challenge makes it mandatory for government school students, seeking reservation, to have secured the minimum pass marks in NEET.

“It is only because of the social, economic and educational backwardness of government school students that preference is being given to them without jeopardising merit,” the State said.

Now that submission of all written documents in the batch of cases, challenging the law, has been completed and the matter is ripe for commencement of final hearing on December 15, the fate of the Act will rest upon the final bang of the gavel.