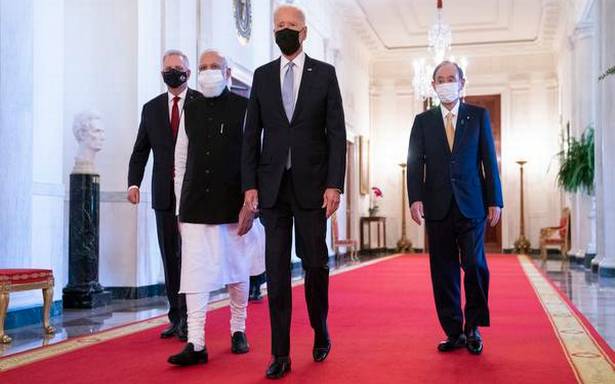 It has too many items on its agenda, and with the announcement of AUKUS, faces the danger of becoming a talk shop

A reassurance to allies

Still reeling under intense international criticism in the way the United States withdrew its forces from Afghanistan resulting in a humanitarian disaster, AUKUS seeks to unambiguously signal U.S. President Joe Biden’s commitment to U.S. allies especially in the Indo-Pacific.

In some ways, AUKUS helps reassure its allies of the U.S.’s security commitments and underlines Washington’s pivot to the Indo-Pacific. Second, the deal and particularly the sharing of American nuclear submarine technology with Australia will help Canberra overcome past hesitations about taking on China with more conviction. Third, notwithstanding the point that AUKUS may set alarm bells ringing for the Quad, AUKUS is still a shot in the arm for the larger Indo-Pacific agenda of which India, the U.S., Japan, Australia, among others, are key partners. In other words, AUKUS will help the Quad’s declared aim of keeping the Indo-Pacific region free, open and inclusive thereby contributing to its core agenda.

AUKUS may not replace the Quad and yet it appears that AUKUS has ventured where the Quad has been reluctant to make forays into — the military domain. More so, AUKUS also exposes the inherent, also self-imposed, limits of the Quad, i.e., its inability and lack of desire to give itself any military role. The focus of the recently-held Washington summit, on challenges ranging from COVID-19 to climate shows that the Quad is unlikely to take a security-dominated turn; that is precisely the vacuum AUKUS seeks to fill.

The larger question then is whether the Quad is losing its steam. For sure, the Quad seems to offer no clear purpose which, as a result, leads to too many items crowding the agenda. It neither has a secretariat or a charter, like the Shanghai Cooperation Organisation (SCO), nor a clear set of activities such as AUKUS. The ever-growing list of focal areas of the Quad will eventually make it a less than useful deliberative forum.

Put differently, with too many items on its agenda, the Quad faces the danger of becoming a talk shop with very little actual work. What is ironic is that all the Quad members have security/military considerations in mind vis-à-vis China while engaging the Quad platform, but no one seems to be keen on framing it in such a manner, as is evidenced by the summit’s joint statement (North Korea and Myanmar find mention in the statement though, not China). There is little interest in properly institutionalising the Quad nor has the objective for ‘Quad Plus’ been purposefully pursued.

Let me put this somewhat differently: Indo-Pacific remains a grand strategic vision, AUKUS has the potential to become a major military/security arrangement in the Indo-Pacific, and the Quad/Quad Plus could end up becoming a talk shop within the Indo-Pacific.

Technically, New Delhi’s stand is accurate — just because there is a striking similarity in the membership of these forums, they are not the same institutional architecture. And yet, if one were to go beyond such technicalities, it is evident that these groupings share a larger vision about the Indo-Pacific, i.e., addressing the challenge from China, and the desire for an open and free Indo-Pacific. Be it AUKUS, which enables Australia to stand up to Chinese bullying or provides the United Kingdom — its aircraft carrier, HMS Queen Elizabeth, the flagship of the U.K.’s Carrier Strike Group, is in the region — with a more prominent, and desirable, role in the Indo-Pacific or the annual Malabar exercises which focus on the Indo-Pacific or the Quad, their common geopolitical theatre is the Indo-Pacific. So while they are not technically related to each other, there is a broader reality that unites them all. There is no point in refusing to accept that self-evident reality.

There is also little doubt today that the Indo-Pacific is of great importance to India for a number of reasons. For one, given the continental challenges it faces including from the new developments in Afghanistan, New Delhi would do well to shift some attention to the maritime sphere. Second, at a time when India is continentally pressed against a rock and a hard place, an opportunity has presented itself for India — in the form of growing global interest in the Indo-Pacific — to be at the centre of a new geopolitical churning which it must make use of for its own security and prosperity. Third, it is also a major way of bringing together like-minded states to check Chinese hegemony in the region.

Given this context, if AUKUS potentially overshadows the enthusiasm around the Quad, it would be disadvantageous to India’s interests in the Indo-Pacific region. Other Quad counties are either on the AUKUS or are alliance partners; India is neither. Eventually, therefore, the Quad faces the potential challenge of becoming a talking shop without an actionable mandate. More so, bereft of any defence arrangement, the material returns from the Quad over time would also be minimal.

This situation is made worse by India’s hesitation about joining major regional economic frameworks. India, for instance, is neither a member of the Regional Comprehensive Economic Partnership nor can its trade relations with the Indo-Pacific countries rival those of China. So, given our rather weak economic influence and performance in the Indo-Pacific region, what might help the country is being part of a security arrangement which can take care of its regional defence/security concerns. Even before AUKUS, India’s current engagement of the Indo-Pacific was neither capable of contributing to its national security nor promoting its economic influence in the region. And now, AUKUS may have further shrunk the potential space available for the Quad, and India, to play a serious role in the region’s security architecture.

Even though it is not just New Delhi which is hesitant about the Quad venturing into the security/military domain, India has been hesitant about the Quad moving beyond the non-military issues. So, what are the sources of New Delhi’s hesitation regarding a robust role for the Quad in the security/military domain? One could advance two hypotheses in this regard. One, India’s traditional reluctance about military alliances and the desire to maintain strategic autonomy. New Delhi fears that militarising the Quad could undo this jealously guarded tradition. It is, however, possible to explore military utility for the Quad without making it a formal military alliance. More so, exploring mutually beneficial military and security cooperation within the Quad framework need not contradict the principles of strategic autonomy. The operative part of ‘strategic autonomy’ is autonomy, not strategic.

The second hypothesis has to do with domestic political considerations: The Narendra Modi government is keen to avoid any military overtones for the Quad due to potential Chinese reactions to it. Recall how India and Australia had for many years soft-peddled the forum for fear of provoking China. Australia seems to have overcome its hesitation, but has India done so? For the Bharatiya Janata Party-led government, any heat on the Line of Actual Control with China in the run-up to crucial State elections next year and then the 2024 parliamentary election would be unwelcome. This seems, therefore, to be a case of domestic political considerations trumping the pursuit of strategic necessities.

Happymon Jacob teaches at the Jawaharlal Nehru University, New Delhi and is the founder of the Council for Strategic and Defense Research 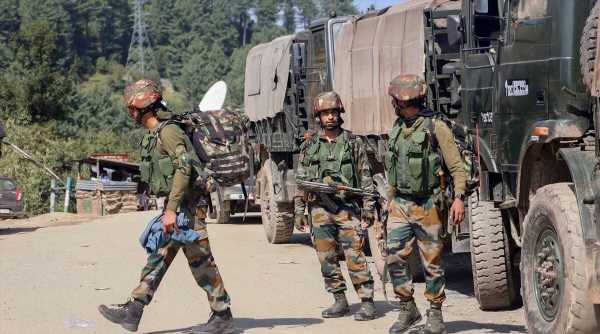