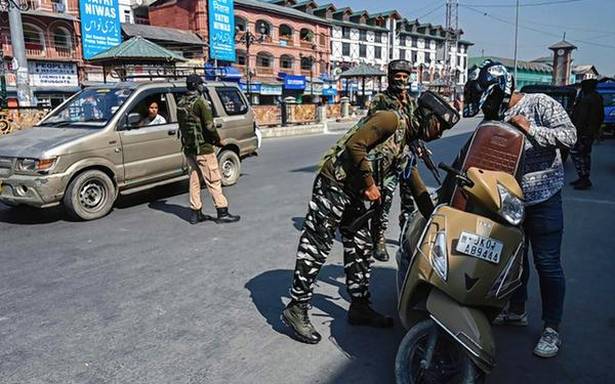 The shadowy outfit targets both security personnel and civilians in Kashmir

The outfit was born nine months after the Union government ended Jammu and Kashmir’s special constitutional status on August 5, 2019. The TRF’s name first surfaced after a four-day gun battle was reported near the Line of Control (LoC) in Kupwara’s Keran Sector, starting April 1, 2020.

According to police records, five infiltrators from the Pakistan-occupied Kashmir (PoK) surprised the security personnel by holding on to an inaccessible area of Keran for more than five days in well-accumulated snow. The “well-trained” and “motivated” militants were killed only after the Army’s elite troops launched a gun battle that lasted for days. Five soldiers, including a Junior Commissioned Officer (JCO), lost their lives. It was the newly-formed TRF’s first attack in Kashmir. All the five slain militants remain unidentified till date.

The nomenclature of the outfit was a departure from the past when militant groups’ names would have obvious Islamic references.

“The name TRF was an attempt to secularise the idea of jihad to present the Kashmir insurgency as a political cause rather than a religious war as was manifested by the names such as the Lashkar-e-Taiba (LeT) and the Jaish-e-Muhammad (JeM),” a senior police officer said.

It was not just the nomenclature, the TRF’s operational style and recruiting were also different. Unlike Hizbul Mujahideen’s ‘poster boy commander’ Burhan Wani, who galvanised youth support for an armed insurgency only to be killed in a gunfight in 2016 in south Kashmir, the TRF is against uploading the pictures of its cadre online or revealing the command chain.

The faceless and tech savvy organisation took to the social media to propagate its messages. The TRF used body cameras like the GoPro to shoot attacks on the CRPF and the Army in Kashmir, which they used to “motivate” their recruits, say officials. On November 26, 2020, TRF militants filmed an attack on the Army’s 2 Rashtriya Rifles near Srinagar’s Lawaypora area, in which two soldiers were shown being shot dead from a close range and weapons snatched on the Srinagar-Baramulla highway. The TRF also used Twitter handles to claim attacks and issue a chargesheet against those targeted. “To gain traction and attract youngsters, the TRF uses videos from live encounters to show off its deadly capability,” another counter-insurgency officer said.

According to a police report, the TRF and the People’s Anti-Fascist Front (PAFF), another militant group, are shadow outfits of the LeT and the JeM. However, the TRF claims to be working independently.

The initial cadre of the TRF comprised locals trained in Pakistan. They travelled on passports and returned via Wagah, according to the report. Additionally, well-trained young militants are being sent to Kashmir via the LoC.

The police officer said the TRF’s tactics marked a departure from the post-2016 militancy. “There are no ‘fidayeen’ (suicide) attacks; very little photographs of cadres are available and they choose soft targets through a broad base network of ground workers. A new breed of workers has been created who are not in the radar of the security forces, which makes tracking difficult and attacking easy.”

Security agencies managed to dent the outfit’s ability to strike when they killed its ‘commander’ Abbas Sheikh, a resident of Kulgam, in an encounter in Srinagar in August. Security personnel wore sportswears and attacked his hideout, and shot him and his associate from a close range. Sheikh, a veteran from south Kashmir, had been active in militancy for more than a decade.

Inspector General of Police Vijay Kumar described Sheikh’s killing as “a big success”, which was seen a blow to the TRF’s operational capability. However, the shadowy outfit seems to have reorganised itself within weeks, and started carrying out attacks in the Valley, directly targeting civilians.