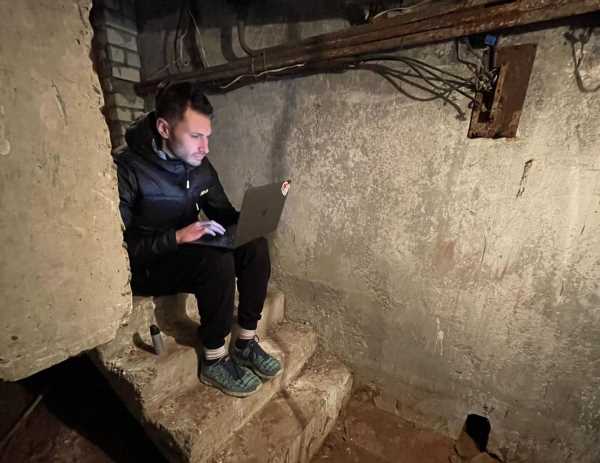 ‘Another friend told me that the Russians had come to their homes, killed their neighbours and raped his neighbour’s wife, and they killed even children in Bucha.’

The mornings have been simply awful.

The nights not that much better.

The five nights he took shelter, with hardly a sweater or coat, in an underground parking lot were cold, miserable, disheartening and gruelling.

Some days the rockets were coming down not even 500 metres away. One morning a rocket hit a children’s park located at a distance of hardly a hundred metres.

It’s been a devastating, unreal 43 days.

Andrey, in an interview over WhatsApp to Rediff.com‘s Vaihayasi Pande Daniel, is not sure what day of the month it is, let alone the day of the week.

That’s not really of much consequence when you are living day to day like he has. And trying to work too — his job is with a publishing firm and he liaises with many Indian clients/connections and has even been to the Taj Mahal.

But Andrey also knows plenty well just how lucky he and his family have been.

Residents of Vynohradar, a historic Kyiv district to the north of the city, living near the bombed-out enormous Lavina Mall and 57 km from Bucha, the fighting has been uncomfortably close, the war literally tiptoeing upto their doorstep. “My district is the most dangerous part of Kyiv.” And they have remained unscathed.

It’s Andrey’s mother’s intuition that has kept them staying on in Vynohradar even after that miserable sojourn in the basement parking lot.

The Korchinskiys — Andrey, his girlfriend, his younger 19-year-old computer programmer brother and his mother — had plans to leave the city and head for the little house they have in the country at tiny Horenka, north of Kyiv.

Iryna’s Intuition was responsible for that idea getting nixed. Lucky for that, because the village, which is 3 km from Bucha and Irpin was attacked and they don’t even know today if their home over there is standing.

“We were thinking we would be in a more secure position there. But a few days later, the Russian army attacked this small (town). Our neighbours there had to live in a bomb shelter for approximately two weeks, without food and with limited access to the water. The Russian army was destroying civilian homes and grabbing all the equipment from the house.

“Fortunately, we decided to stay in Kyiv and not go to this house. We still don’t know what’s happened with our home. We heard from someone who lived there that our house has been destroyed.” In the first few days of the Russian invasion, it was extremely difficult for the Korchinskiys to decide a plan of action.

Carry on in the face of everything?

In spite of the brutal season of shelling, the last option turned out finally to be really the best one.

“Frankly, speaking, the situation has become much better right now. We don’t hear bomb explosions or missiles that hit very close to us. Approximately three weeks ago it was a really dangerous time here. Three missiles hit my district and one missile hit very close to my apartment.”

After the missile hit the children’s park that morning, Andrey went down to see, “There were a lot of police officers, guys from security service and the fire department. Approximately three or even four buildings were completely destroyed because of the Russian missile and they hit civil buildings.”

They never saw any Russian soldiers, even from far. “One time we saw a tank. Based on the information we received, it was a Russian tank that had escaped from some battle. We saw this tank just go through the city. And then our army deactivated the tank.” On another day he was over at a friend’s place for his birthday. It was not a party but a gathering of four or five pals and from the friend’s apartment on the 19th floor they saw, horrified, a rocket coming down, from the night sky, almost in slow motion, and destroying a residential building 500 metres away.

It was these rocket hits that drove the Korchinskiys to seek refuge beyond their flats initially.

“When we start hearing the first bomb explosions that were very close to our apartments and noises from the machine guns, we decided to go to the bomb shelter.

“There were approximately 50 people inside, some with small children. The conditions were not comfortable but we felt very secure. We slept on the ground. We shared food with other people. Sometimes we slept in my car (to fight the cold) that was in the parking. The temperature was somewhere between like five or six degrees only.

“We didn’t have any warm clothes as we were really in a rush (to get to the bomb shelter) because we didn’t know what will happen next and thought probably some of the missiles could target to our apartments.”

But the few miserable days in the bomb shelter decided things ultimately. They would not escape the city or stay on in a bomb shelter, but take their chances and stay right at home in their own apartments; his mother and brother live nearby.

“My mother decided to stay. I was trying to change her position, but she said ‘My inside voice told me that I need to stay here. I need to stay in Kyiv. We don’t need to go…’

“It’s like intuition from my mother. It’s like internal intuition. My mother’s intuition was right. I asked my mother, several times, after the missile hit civil facilities 100 meters away, which was dangerous, ‘We need to go. We need to escape. I am really afraid for you’.

“She mentioned, ‘My internal voice told me that we need to stay here in this place, because this is a more secure place right now’. And she was right. I believed my mom’s intuition every time.” Ever since the Russian army was pushed back 70-80 km from Kyiv, people are attempting to assume a ghost of an ordinary existence, like it was before the war.

“People try to return back to their normal life.” And then the air-raid sirens go off…

“We cannot predict what will happen next. Because you know that the Russians can do really cruel things. They can just start bombing civilians’ apartments just for fun.”

Andrey says Kyiv, which had a population of nearly five million, saw three million flee west or abroad. Now many of those who escaped are returning. Food and gas supplies have normalised — no longer are meat and bread scarce or 20 litres petrol allowed per head. Some coffee shops are open. Many restaurants are providing food free for the elderly, homeless and the army. When curfew permits, Ukrainian Orthodox churches on Sunday have many attendees, who weep or pray for Ukraine, the Ukrainian army and the people, he says.

Andrey finds succor in work. From the start, he has worked very hard to portray it is business as usual at his company, in an attempt to inspire junior colleagues and keep the faith of his clients, in spite of the “tough times.”

“(When we were in the car park) I set up a new home and office. I slept, ate and worked from there. It was a bomb shelter and sometimes I could even see the rats but still nothing can stop me to do my job. I really love my job and do my best to (continue to be) involved in the business processes.”

Hugely courageous attempts at normalcy cannot push back the sadness. Facebook feeds of ordinary Ukrainians are now pages and pages of poignant missing or found picture notices. From Kharkiv. Mariupol. Bucha. Kyiv. Irpen. Temporarily or permanently orphaned tots looking for parents or family. Parents for little children who have gone missing. Lost, confused elderly people trying to find their relatives. Mothers and fathers seeking missing soldier sons, not seen since the last skirmish. Of zoos unattended. And huge populations of wandering, bewildered pets — dogs and cats who can’t find their owners or owners trying to locate a pet who went missing after an explosion or building collapse.

The disturbing pictures of the massacres in Bucha that are coming in have not helped national mood.

“All the country is crying after we received messages and these terrible photos from Bucha and Irpen, where they killed a lot of civilians for nothing… just for fun. These are real stories from friends.” Andrey says he receives first-person tales of damage, pillage, rapes and deaths. “A friend of mine decided to leave Irpen. The day after he left, a missile hit his house, a private house, destroyed everything and his car. Another friend of mine told me real crazy things. That the Russians had really come to their homes, killed their neighbours and raped his neighbour’s wife, and they killed even children in Bucha — can you imagine. They can do anything. They’re like demons.”

What the Russian invasion of Ukraine has thrown up for all the world to see is a new brand of bravery — the gritty, never-say-die Ukrainian courage. It’s a kind of plucky, little-guy valour that’s more than ready to take on XXXL bullies. Come what may, Andrey has zero plans of leaving his home. A proud, fourth-generation Kyiv native, he will defend his city to the last.

“I want to stay here with my family. If soldiers enter the city, I’m a fit, healthy guy and can handle a weapon, if I have to really to protect my own city from the Russian occupation. That’s the main reason why I decided to stay on in Kyiv. If the situation becomes worse, I will definitely handle a weapon and go to protect my own city, my family, my district from these invaders.”

Yes, of course, I especially my mother, because you know, she wants to survive. And actually the first day of the war, she come from the shop, and he has more than four or five buckets of the food provision, like mostly it was a porridge and a lot of breads she decided to buy everything, because we couldn’t, we couldn’t predict what will happen.