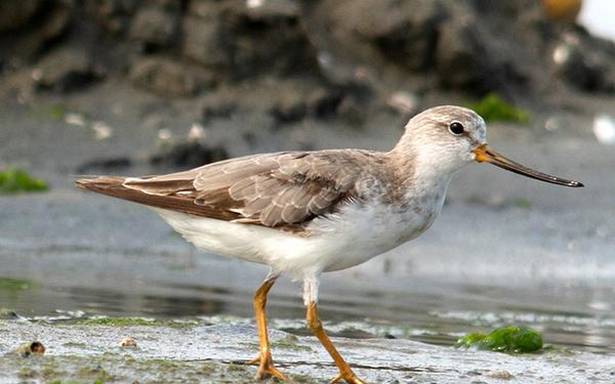 The Terek Sandpiper’s more attention-grabbing feature is its upcurved bill. Here again, the Pied Avocet is comfortably placed above the competition. The Terek Sandpiper’s nickname — Avocet Sandpiper — in fact settles the matter, announcing who gets the better of the other in the two-feature contest.

Balachandran has literally had a “ring-side” view of this species, having held some in his palms, year after year, to have them ringed.

A Terek Sandpiper flock on a mudflat at Pulicat. Photo: Sundaravel Palanivelu

“On an average, 15 to 20 Terek Sandpipers are ringed at the centre,” Balachandran volunteers the information.

His observations of the Terek Sandpiper at Point Calimere confirm what is generally believed to be true about the species. That it does not wrack its steep forehead over the Ruddy Turnstone poking around in its feeding area.

It is their differences that probably enable these two birds to share feeding space, without frequent squawks of protest.

With its strong and short bill, the Ruddy Turnstone probes into the mud and pecks hard at the flotsam that may be harbouring prey, or turns small stones to expose hidden meals.

Balachandran points out that with its upcurved bill, the Terek Sandpiper’s foraging behaviour contrasts sharply with the Ruddy Turnstone’s.

“The Terek Sandpiper has to scoop its prey out of the mud, before ingesting it,” explains Balachandran.

From there, an inference is almost begging to be made.

Though the Terek Sandpiper shares a good part of its diet plan with the Ruddy Turnstone — the Terek Sandpiper feeds largely on crabs, and sometimes molluscs, as Balachandran puts it — the difference in the design of their feeding tools seems to be achieve a balance that enables bill-gritting tolerance and co-existence.

It is at common feeding grounds that one finds a strong reason to be thankful that birds’ bills do not follow a cookie-cutter design.

“The Terek Sandpiper does not occur in large flocks in any part of its distribution range,” says Balachandran.

Vikas points out that in its range, sightings of the Terek Sandpiper are most likely around tidal flats, particularly mangrove tidal flats, and estuarine systems.

“It is found in such an environment around Marakanam, Mudaliar Kuppam backwaters and Pulicat,” he elaborates. Given this, why doesn’t Adyar Estuary also figure prominently among its hangouts?

“It may be difficult to find the bird there, but not impossible. It is a skulky bird and would not be visible from a place that we are able to access. They could be found in the sand bars at Adyar Estuary,” is Vikas’ response.

The eBird reviewer however calls it a “regular” bird showing up where it is expected to — Vikas’ view is based partly on his observation of the Terek Sandpiper consistently keeping its date with a particular sand bar at Mudaliar Kuppam Backwaters, over the years.

Balachandran is of the view that the Terek Sandpiper is found in greater numbers India’s west coast, and he partly bases it on a ringing exercise at Mumbai that accounted for “200 to 300 Terek Sandpipers in a span of two years.”

“The Terek Sandpiper used to be more common: Now, they are becoming slightly more difficult to sight,” Vikas seems to echo that view. “People are out more. More birding sites are surveyed now, and probably because of that there is a sense of not getting enough of the Terek Sandpiper.”