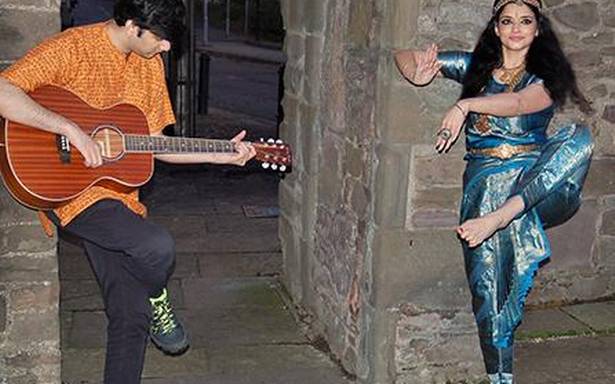 After presenting ‘Nature and Us’ in 14 countries, Sohini Roychowdhury took it to COP26

Earlier this month, at the Adelaide Place Baptist Church in Glasgow, Lord Shiva performed the Tandava, enraged by the abuse of Mother Earth — the angry god played by the Kolkata-based Bharatanatyam dancer Sohini Roychowdhury, who said she was the only Indian to perform at COP26.

Her performance at the medieval church on November 11 lasted 20 minutes, during which she was accompanied by her son Rishi Dasgupta, 22, on the acoustic guitar.

“I performed Nature and Us, one of my key productions that I have been performing all over world stages. It’s about our umbilical connection with nature. I spoke of Shiva as Pashupatinath, the protector of the forests and flora and fauna, and as Neelkanth, who drank up the poison to save our oceans from toxic abuse, and performed the Tandava to depict Shiva destroying evil to refresh and recreate the purity that befits Mother Earth,” Ms. Roychowdhury told The Hindu from London, where she has more shows lined up.

“Rishi played acoustic guitar to bring in the global fusion angle and played to a crescendo to express the Tandava aspect, followed by a softer tune to show harmony between man and nature,” said Ms. Roychowdhury, who has performed ‘Nature and Us’ in 14 countries across the world, with the audience as varied as students to prisoners and places as varied as the Kala Ghoda festival in Mumbai to an anthropological museum in Spain to the Los Andes University at Bogota.

“We have to safeguard our planet, it’s the only home we have for the next generations to come. Being from Kolkata, I can already see the havoc happening in the Sundarbans. I am a part of an NGO, Little Big Help, and we have been helping people there, especially after the Cyclone Amphan. So, climate is the most relevant issue ever and this conference created a huge noise and awareness about it at all levels,” the dancer said.

Her performances are invariably tied to issues: women’s empowerment, support for the LGBT community, welfare of poor children, and, of course, nature.

“All my dance productions end with Vedic, Sufi, and Gregorian chants, playing together with the sitar, as our essence is a world without frontiers. I have worked with the humanism of Tagore, connecting it with nature poetry of Robert Burns and that of Rumi, basically connecting civilisations. As the poet Chandidas said, ‘The highest truth is that we are all human, there is no greater truth’,” Ms. Roychowdhury said.