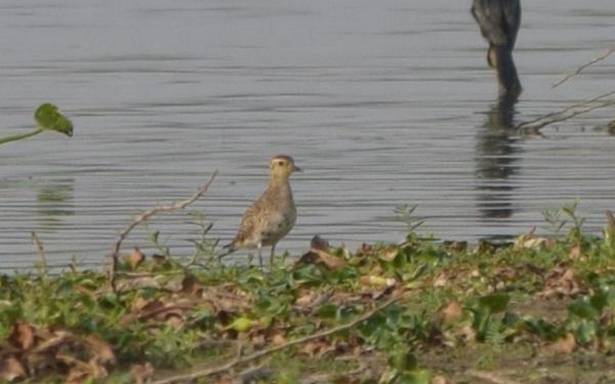 As the migratory birds that arrived at Nanjarayan Tank, near Tiruppur, have begun to depart, birdwatchers noted that three new bird species were spotted purportedly for the first time during the migratory season.

According to president of Nature Society of Tiruppur K. Ravindran, a Pacific golden plover (Pluvialis fulva) was spotted by his team of birdwatchers on March 27. With its breeding habitat at Arctic Tundra extending from Alaska in the U.S. to Russia, the bird usually migrates during winter to South Asia and has been spotted for the first time at Nanjarayan Tank in recent years, he said.

Prior to this, the team spotted gadwall (Mareca strepera) in February and a flock of ruddy shelducks (Tadorna ferruginea) in November 2020 for the first time, he said.

The migratory birds will arrive from various parts of the world to the tank from the first week of October and depart by end of March the next year. Mr. Ravindran said that the visibility was better during this season as the water levels were relatively lower when compared to the previous years, making it easier to spot the birds.