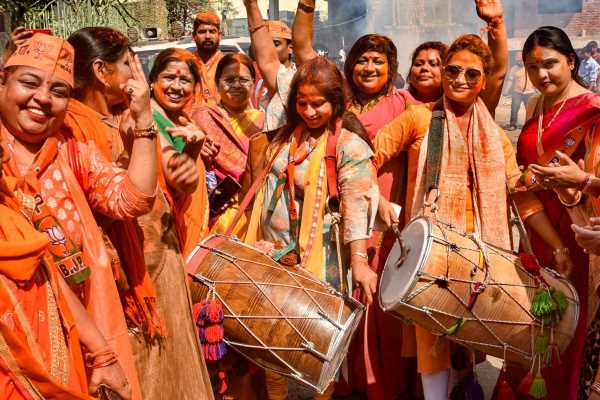 ‘Whoever thought that building toilets and providing free rations to the poorest of poor Indians would give Modi a halo other political leaders would envy?’ asks Sheela Bhatt.

1. Narendra Modi and the Bharatiya Janata Party enter the fight for the 2024 Lok Sabha election with confidence as four of five states have expressed trust in Modi’s leadership.

After four consecutive victories in the tough political terrain of Uttar Pradesh, the BJP’s image as a Brahmin-Baniya party finally ended on Thursday, March 10, 2022.

Modi’s project to change the BJP’s socio-political base reached its climax on Thursday.

The BJP today has not much resemblance to Atal Bihari Vajpayee and Lal Kishenchand Advani’s BJP.

Modi has turned the infamous inefficient, corrupt, corroded system of governance into a huge garib-kalyan mela.

After the results, Pradeep Gupta of Axis-My India told me, “Ration, governance and women voters” gave Modi such a historic victory.

Whoever thought that building toilets and providing free rations to the poorest of poor Indians would give Modi a halo other political leaders would envy?

Modi forced the babus in UP to conduct the state administration around ‘Garib kalyan mela‘ under various government schemes.

Modi’s own transformation since 2002 from Hindutva poster boy in Gujarat to national leader to the astute politician who gave the loaded call of ‘sab ka saath sab ka vikas‘ is entering the new stage.

Women voters in UP, Goa and Uttarakhand are adding to Modi’s political capital, something his rivals would envy.

For the BJP’s core constituency, Modi is no less than a ‘Raj Rishi‘. Else, it was not possible for the BJP to increase its vote share in UP where just months ago bodies of those who perished from COVID-19 floated in the Ganga and more recently where he had to retreat on the farm laws.

In Uttarakhand, the BJP’s victory is surprising if not shocking.

The BJP led corrupt governance, it had three chief ministers in five years and it has a high rate of unemployment. Still, people voted for Modi.

In Delhi, many non-BJP leaders said if the BJP won Uttarakhand, then Modi can do anything through electoral politics. 2. The Muslims of Uttar Pradesh have got a stark message in the wreckage of Opposition politics on the battleground of UP.

The most significant point of this election was that the BJP had none of its usual plank with it.

Article 370. Construction of the Ram temple. Triple Talaq. These issues are done and dusted with. Still, Modi and the BJP won the UP assembly election.

Democracy is all about ‘satta main bhagidari‘ (share of government) through the ballot box.

A vote is power and representation in the power structure gives an opportunity to all citizens.

UP’s Muslims have been deprived of it since 2014. It is now conclusively proved that UP Muslims were not voting ‘strategically’.

They were trapped as they bought the ‘secular-liberal’ rhetoric of vested interests.

It’s so tragic that they have lost in the long run.

By remaining on the losing side for four consecutive elections in UP, the state’s Muslims have gained nothing.

It’s high time they re-join the mainstream of UP politics.

It’s no point that they keep rejecting the BJP as a political entity, as a party. 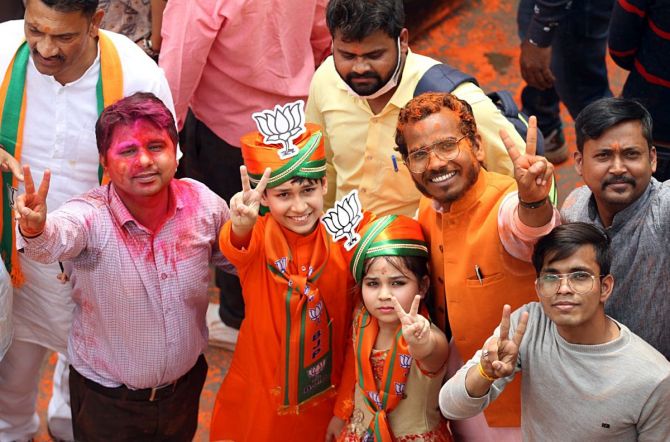 From the panchayat, tehsil and district level, Muslims should support and vote for BJP candidates who promise them equal opportunities.

All parties have secular, communal and in-between-shades-of leaders.

Muslims should pick and choose ‘soft’ BJP leaders and support them.

If Muslims starts voting for the right BJP candidates, their isolation and eventual maginalisation in UP politics will end. It will call off the BJP’s bluff too.

When in Muslim dominated assembly constituencies in UP — there are around 110 such seats — Muslim voters start siding with any candidate who takes on the BJP, the counter polarisation helps the BJP. If such polarisation vanishes, a real democratic election would begin.

As Modi helped downtrodden Dalits and the OBCs to join his ‘Brahmin-Baniya’ party and ended their marginalisation, Muslims too should break the status quo.

Remember, Modi had led Sadbhavna rallies in Gujarat to cement the Hindu-Muslim relationship. It may have failed then, perhaps because it was premature.

It’s high time Muslim voters (and not Muslim leaders with vested interests) take the lead and join the mainstream in UP.

Modi is very likely to reciprocate because this fourth victory in UP will make him and his party more secure.

The time has come for Muslim voters to understand that the Azam Khans, Mukhtar Ansaris and Ateeq Ahmeds don’t give them what they deserve: Satta main bhagidari. 3. A BJP defeat in UP would have caused an earthquake in New Delhi and in the BJP.

But the BJP’s victory has not caused an earthquake in the non-BJP world.

This is what suits the BJP most.

It’s time non-BJP voters understand that Modi is taking India in a direction where dynasts like Rahul and Priyanka Gandhi, the Badals and Majithias and Captain Amarinder Singh stand no chance unless their public personalities changes completely.

Let us remember that Yogi Adityanath was merely one of the BJP’s MPs in March 2017. He didn’t win that assembly election for the BJP.

He was given power on a platter to rule UP. Modi chose him keeping in mind the Lok Sabha election in 2019 and the assembly election in 2022. In the last five years Yogi was given a task scripted by Modi.

Today’s victory began that day in 2017 when Modi was convinced he needed the saffron-clad Yogi in UP and not kurta-dhoti clad UP politicians like Rajnath Singh and Manoj Sinha.