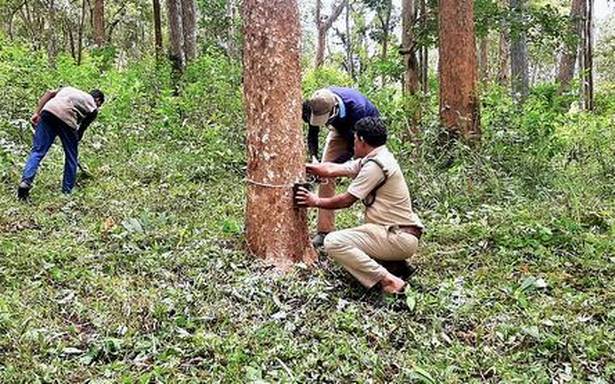 Monitoring of tigers using camera traps as part of the All-India Tiger Estimation (AITE) 2021-22 began in a big way in the Wayanad Wildlife Sanctuary (WWS) and two territorial forest divisions in the district, a region known for the highest density of tiger population in the country.

Each grid line will have two cameras which will record the movement of animals for 30 days from Wednesday.

Wildlife Warden S. Narendra Babu will supervise the exercise which will follow the protocol of the National Tiger Conservation Authority (NTCA). As many as 624 camera traps would be set up in the three forest divisions and the work would be completed by Tuesday, Mr. Babu told The Hindu.

Prior to the programme, 100 frontline forest officials, including 50 officials of the sanctuary and 25 officials each of the territorial forest divisions, were trained for the purpose.

The images captured by the camera traps will be handed over to the NTCA after the programme.

According to the latest tiger estimation conducted in 2018, the region was a haven for 150 tigers, including 120 in the sanctuary and 30 in the territorial forest divisions.

The sanctuary, though home to more than half the number of tigers in Kerala, is losing out on the prospect of receiving tiger reserve status following resistance by the local people. While the Periyar Tiger Reserve, with an estimated population of 30 to 35 big cats, is getting nearly ₹4.5 crore annually, the WWS, home to more than half of the tiger population in the State, is getting only ₹1 crore a year as it does not have tiger reserve status.

Mr. Babu said no new restrictions would be imposed when a sanctuary was turned into a tiger reserve. On the other hand, setting up of a tiger reserve would be beneficial to the villagers as huge funds would be allotted to the reserve for wildlife management, he said.

The sanctuary, spread over 344.44 sq km, is an integral part of the Nilgiri Biosphere in the Western Ghats and contiguous to the tiger reserves of Nagerhole and Bandipur of Karnataka and Mudumalai of Tamil Nadu.