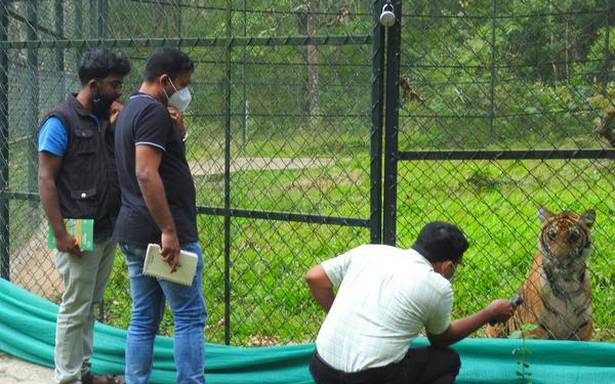 The wait might be longer than expected for Mangala for her return to wilderness. The one-year-and-three-months-old tiger cub, who was found abandoned in the Periyar Tiger Reserve (PTR), was recently diagnosed with infantile cataract.

Nevertheless, the Forest department is pulling out all the stops to prepare its adopted daughter returned to her natural habitat in the pink of health. An expert panel has recommended importing lanosterol-based eye drops from the United States to treat Mangala. It could be the first time in the country that lanosterol, a drug based on a naturally-occurring steroid, is being administered on a wild animal.

Mangala was just two months old when she was rescued in frail condition near the Mangala Devi temple close to the Kerala-Tamil Nadu border at PTR in November 2019. The cub, which weighed 4 kg, was believed to have been abandoned by her mother. Ever since, it has come under the protection of the forest authorities in the State. It currently weighs around 40 kg.

The department had commenced efforts to ‘re-wild’ the animal in accordance with the protocol laid down by the National Tiger Conservation Authority in July last. In a bid to familiarise the animal with the environment of a natural forest, the cub was shifted to a special enclosure spread over nearly half a hectare and trained to hunt its prey with a target of releasing it into the wild when it completed two years.

However, its diagnosis of cataract has thrown a spanner in the works. A six-member expert committee, which included four veterinarians, examined the animal and has recommended lanosterol to treat the illness, said P.P. Pramod, field director (PTR), Kottayam. However, the final decision will have to be made by the Chief Wildlife Warden, he added