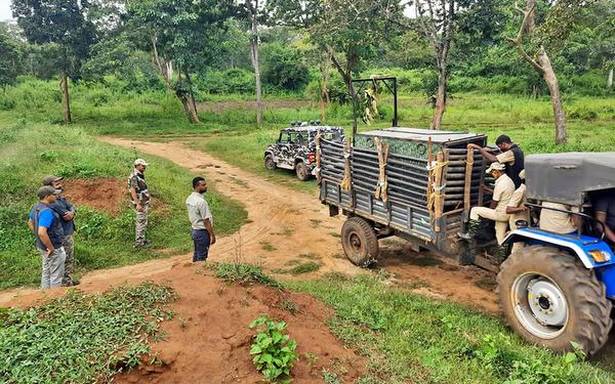 The tiger, which killed a teenaged boy in the Muddanahalli forest reserve attached to the Nagarahole National Park last week, continues to be elusive despite 360 degree combing to nab it since the last four days.

Ganesh of Ayynakere Haadi in Hunsur taluk was killed in the tiger attack on Wednesday and scores of Forest Department personnel are scouring the region to track the animal.

Besides combing on the ground, the department personnel has used normal drone for aerial surveillance during day and a thermal drone to monitor movement at night but to no avail.

What is intriguing is that the tiger had approached the same spot where the boy was killed and though a cage was kept, it did not fall for the bait and disappeared. “It was then that the tiger was camera trapped and its identity established,” said Mahesh Kumar, director, Nagarahole Tiger Reserve.

He said the camera trap images indicated that the tiger had sustained injuries, visible on its body, and this could have led it to stalk and attack the boy. Though 25 camera traps were laid on day one followed by another 70 on day 2, the tiger has not been sighted in the vicinity, Mr. Kumar added. At least three images of tigers have been recorded in the traps but an analysis of their stripe pattern indicated that they were different tigers.

Meanwhile, the authorities suffered a setback when at least three camera traps were stolen. “We do not know if any of the three stolen camera traps contained the tiger’s image,” said Mr. Kumar.

He said the tiger’s capture also calls for cooperation from the local community but they were not forthcoming as they created problems while installing the cage on the night the boy was killed. The resultant delay could have helped the animal slip away and the golden hour was lost, said the official.

A cattle kill was reported close to Ayanakere Haadi where the boy was killed and the authorities and locals are on tenterhooks.