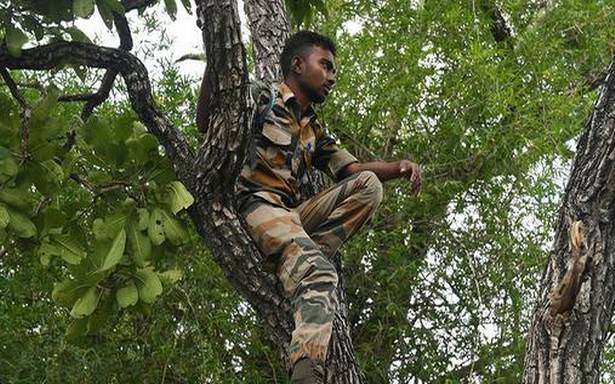 One sighting was dismissed as that of another tiger

The ninth day of the operation to locate and tranquillise tiger T23 in the Mudumalai Tiger Reserve (MTR) ended on Monday, with the Forest Department no closer to its objective.

Teams on elephant-back and on foot combed through the Masinagudi and Singara forest ranges in search of the tiger that has not been spotted since Saturday.

While one sighting was dismissed as that of another tiger in the vicinity, a vehicle-safari operator told officials that he spotted an injured tiger, resembling T23, along the Masinagudi-Theppakadu Road. However, teams were unable to locate it. Later, T23 is believed to have been spotted along the Sigur Road. Officials said their focus would be on the area on Tuesday.

MTR Field Director D. Venkatesh said locating the tiger proved to be a challenge because of the terrain and the forest cover.

Bhosale Sachin Thukkaram, Deputy Director of MTR, Core Area, said the search was continuing with drones, sniffer dogs and field teams. The search area was expanded to Devan Estate at Gudalur where the tiger is believed to have attacked another person on September 24, leading to his death.

Rain in the evening cut short the search, which will resume on Tuesday.