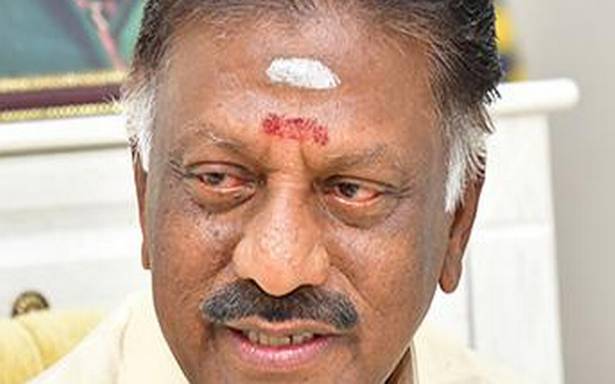 50% of people do not wear face masks, he says

The AIADMK coordinator, O. Panneerselvam, on Tuesday called for tightening restrictions with a view to controlling the spread of for the Omicron variant of SARS-CoV-2.

In a statement, he quoted the reported observation of the World Health Organisation regarding the need for containing the spread of the variant. Pointing out that norms on personal distancing were not being followed, Mr. Panneerselvam said 50% of the people did not wear face masks and there seemed to be a lack of awareness in this respect.

Apart from ensuring that people adhered to the norms, the State government should create awareness even among those who had taken vaccine and see to it that all the uncovered persons be vaccinated rapidly. Chief Minister M.K. Stalin should pay special attention to the issue of coverage of all domestic and international tourists coming to Tamil Nadu.

Mr. Panneerselvam, in a letter, requested Union Minister of Textiles and Food Piyush Goyal to take up with the Union Finance Ministry the issue of GST on textile and apparel items and ensure that it is reduced from the proposed 12% to the present 5%

Meanwhile, the party’s former interim general secretary, V.K. Sasikala, referred to the incident in Kanniyakumari district, reported on social media, wherein a woman belonging to the Narikorava community was put to hardship by local officials, and called upon the government to create a hassle-free environment for the community.