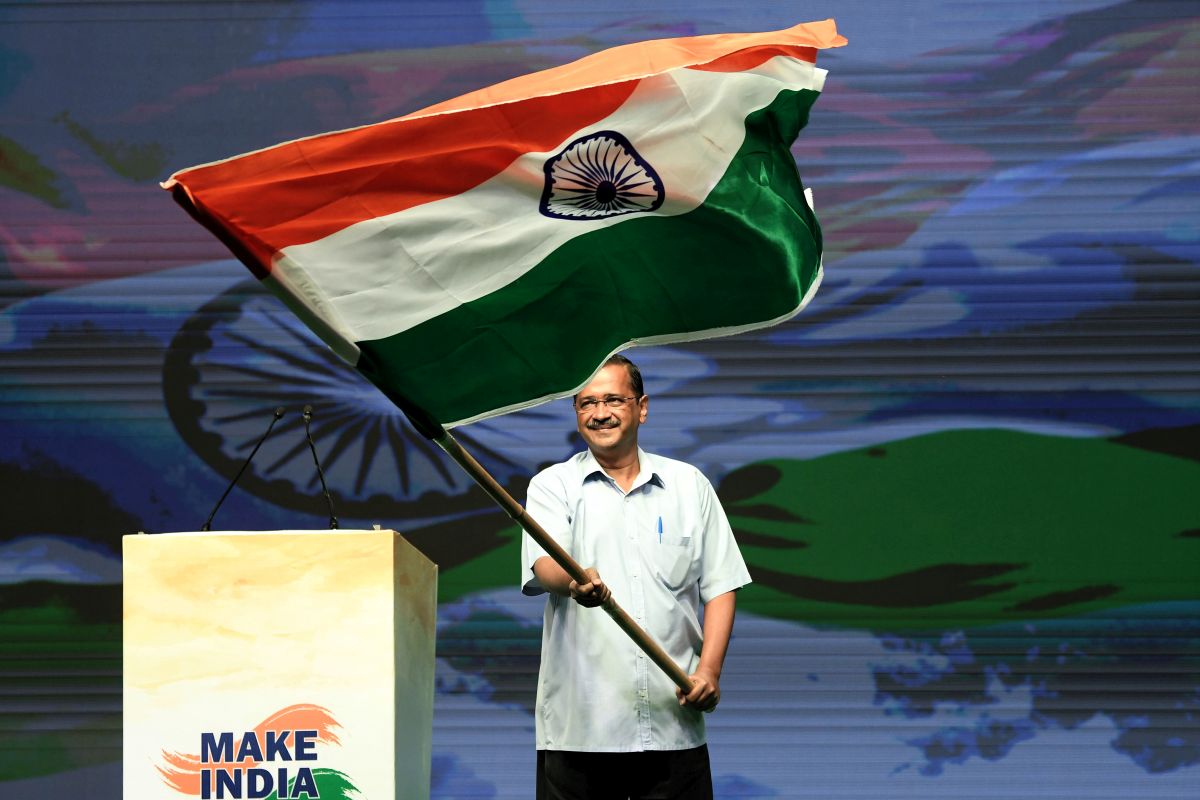 The War of the Tiranga is a metaphor for a new battle of ideas in national politics, observes Shekhar Gupta.

Only two parties have tried to out-Tiranga the BJP on its Tiranga campaign — K Chandrashekar Rao in Telangana and the Aam Aadmi Party in Delhi and elsewhere.

The AAP response is, however, more substantive and also relevant, because they are the only other challengers to the BJP besides the Congress with a pan-national presence.

In their case, it’s growing while the Congress party’s is fading.

AAP is also way more capable of street fighting than the Congress.

They were the quickest to figure that the war of the Tiranga would be the next chapter in the tussle of nationalism.

And in this war, both the numbers and the size will matter.

That’s why they decided early enough to have the capital awash with the national flag — no less than 500 of them.

And each so big that you can’t miss it even from a distance.

The message: Not only is mine bigger than yours, there are also many more of mine.

The War of the Tiranga, however, is not some school-gang fight over some symbolic issue. It is a metaphor for a new battle of ideas in national politics.

The essential proposition, or the foundation on which Narendra Modi’s BJP built its post-2013 politics, was religion and nationalism.

In most democracies, this will be a killer combination unless the rival can make better claims to it.

That wasn’t the case with the Congress by that time.

Both the Congress and AAP had contested the BJP’s monopoly claim over Hindu religious sentiment over time.

Rahul Gandhi has responded by visiting temples, carrying out rituals, and his people have flaunted his sacred thread and Brahmin gotra. That, however, has come across mostly as apologetic.

Like saying look, I too am a Hindu. That doesn’t counter Mr Modi’s appeal to the Hindus.

If at all, it gives his party the opening to say see, we made even the Congress remember the gods and acknowledge Hinduism as a factor in politics.

Arvind Kejriwal was a bit more successful, even if it took mugging up the Hanuman Chalisa from his phone on his way to a television studio and then setting up the unsuspecting anchor by defying him to ask if he could recite it from heart.

And then he wowed the Hindus by doing so himself.

He also had the smarts to offer free pilgrimages to senior citizens, mostly to Hindu centres but also tossing in Ajmer Sharif and the key gurdwaras.

But his government’s advertising featuring him as a modern-day Shravan Kumar (the storied ideal son who carried his blind parents on pilgrimages across India on his shoulders) left nothing to imagination.

He is fighting Hinduism with Hinduism — we avoid using Hindutva unless it is in the specific, Savarkarite, political context.

In power in Delhi, AAP did not speak up on the January 2021 riots, the incarceration of so many young Muslims, or on lynching elsewhere. At least never in the spirit of activism they are identified with.

They’ve been sharp, now raising the question of ‘destruction of temples’ in Gujarat to build infrastructure or because they are built on encroachments.

But they also know that on religion, the best you can do is fight a defensive or a hedging battle.

Nationalism is another matter. This is where a bare knuckles fight has now broken out between them and the BJP. It’s been flagged off by the Tiranga, what else!

Bare knuckles isn’t exactly a most apt metaphor since the immediate context is freestyle wrestling, but makes our point since we are mixing hard politics with contact sport.

Watch therefore the fight between the BJP and AAP over the complaint by woman wrestler Divya Kakran, who just won a wrestling bronze at Birmingham.

Her complaint — though she lives in Delhi, the Kejriwal government has done nothing for her — has been widely used by BJP people to attack the AAP government.

The insinuation is that its commitment to both, the truth and nationalism, is dodgy — the truth because it apparently made promises to her in the past, and nationalism because, after all, isn’t that what a sporting medal is all about?

If the Kejriwal government defends itself by saying she is from Uttar Pradesh, so why should they reward her, the response is that she lives and trains in Delhi, while being employed by Indian Railways here.

Any which way, the BJP sees Mr Kejriwal as defending himself. Wait now for the next move from Mr Kejriwal. 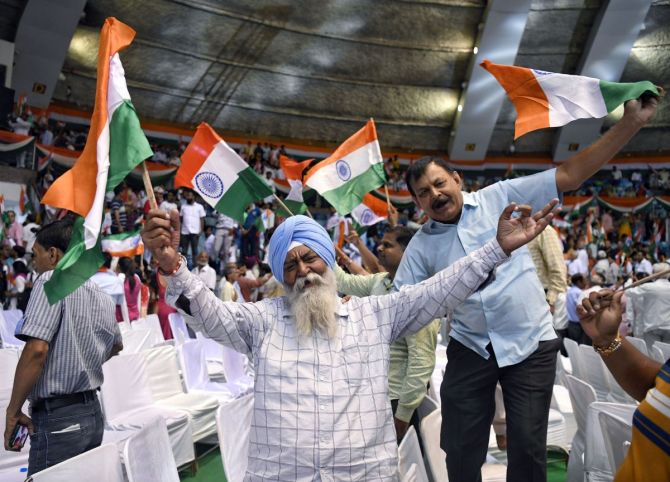 Like the Tiranga, this too is a piece in the big picture where a new battle of ideas has begun in national politics. And it is about nationalism.

For three years after Mr Modi won his second national mandate in 2019, Mr Kejriwal had carefully avoided making any attacks on him.

It’s as if he didn’t exist as a threat or a challenge. Not even when he campaigned in the subsequent Delhi Assembly poll and swept it again.

These were smart tactics. If so much of the BJP’s national sway is owed to one man, it is foolhardy to go head-to-head with him.

Good politicians are not kamikaze pilots. And definitely not when they’re underdogs by such an enormous margin. But they can wage guerrilla warfare.

That’s why attacks on Mr Modi, if any, were carried out mostly by AAP’s Twitter warriors.

Over the past few weeks, this has changed. Mr Kejriwal’s maun vrat on Mr Modi has ended.

This is an important turn in Indian politics — in some ways rivalling the dramatic turn in Bihar.

We say this because while Bihar has given a new energy to the warriors of old social justice and Mandal politics — the good days when caste could divide the Hindu vote were returning — the big picture is different.

There is zero evidence yet that Bihar can have the same overhang effect over Indian politics as it might have had in 1989-1991, or even earlier, in 1974-1975 (pre-Emergency popular protests).

The battle for national power will still be over religion (the Hindu vote) and nationalism.

Two important things follow. That, at a pan-national level the Congress isn’t yet ready to fight on these planes.

At the same time, AAP is heading for the big test of its national ambitions in the coming elections of Himachal Pradesh and Gujarat, where it’s aiming to displace the Congress as the alternative to the BJP.

It cannot do so by attacking the Congress. It has to take on the BJP. It was adroit enough to fight in the Delhi assembly poll without attacking Mr Modi. Or even in Punjab where the BJP doesn’t count.

For Mr Kejriwal in Delhi and Punjab it was quite possible to de-Modi-fy their campaigning.

With their ambitions rising now, that has to change. That’s why, to use another boxing metaphor, gloves have to come off.

India’s most audacious new party has joined the battle with Mr Modi, freebies and nationalism. The latter is more visible.

It’s going to be an interesting — and important few months in what remains of this political year.