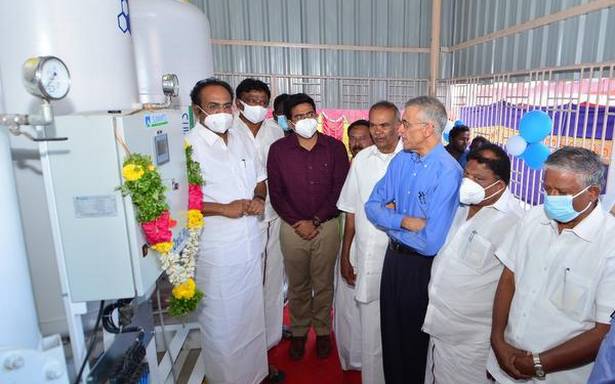 It can produce 600 litres of medical-grade oxygen per minute

Speaker M. Appavu inaugurated the oxygen generator, which has been established on an outlay of ₹1 crore, on Thursday in the presence of Minister for Industries Thangam Thennarasu, Collector V. Vishnu, Corporation Commissioner B. Vishnu Chandran, MP S. Gnanathiraviam, and MLAs M. Abdul Wahab and Ruby R. Manoharan.

Work on installation of the oxygen generator, capable of producing 600 litres of medical-grade oxygen per minute, commenced on September 10 and was completed on November 9. Along with the generator, an oxygen tank with a capacity of 2,000 litres was also installed for storage.

“The oxygen generated in the new plant will benefit the patients of fertility and paediatric wards. It will help save the lives of 15,000 patients annually,” said Mr. Thangam Thennarasu.

When the second wave of COVID-19 triggered huge influx of patients with severe breathing difficulty into TVMCH, the hospital, with its limited medical-grade oxygen, struggled to meet the sudden spurt in demand. The oxygen supplied by Indian Space Research Organisation’s Liquid Propulsion Complex at Mahendragiri rescued the hospital to some extent and the oxygen tankers received from other States saved the lives of thousands of patients.

The situation improved further when Sterlite Copper’s oxygen plant also chipped in with significant quantum of medical-grade oxygen produced by its plant in Thoothukudi.

Meanwhile, Mr. Vishnu and Mr. Thangam Thennarasu visited two defunct oxygen plants at SIPCOT Industrial Complex at Gangaikondan and Sethurayanpudhur, which were made operational to meet any situation.

The Collector’s efforts also ensured the installation of another oxygen plant, imported from Turkey, at the 120-bedded Koodankulam Government Hospital in July with the capacity of generating 1 tonne medical-grade oxygen a day.

“The latest addition [oxygen generator of TVMCH] will effectively meet the oxygen needs of the patients getting admitted here,” said Mr. Vishnu.