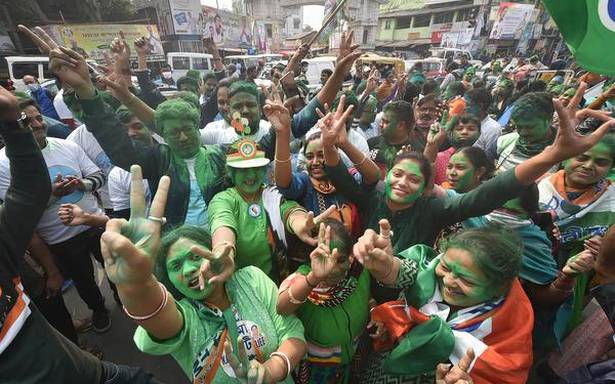 Trinamool Congress secretary general Partha Chatterjee on December 22 said the party does not approve of excesses by its workers on opponents after the landslide victory in Kolkata Municipal Corporation (KMC) poll and cautioned that it will take swift action if any such incident is reported.

Mr. Chatterjee, who was asked to comment on the alleged take over of a BJP party office at Behala in the south western part of the city by TMC workers after the declaration of the civic poll results on December 21, said "I am inquiring about it. Every party, every organisation should have the right to pursue their activities, to have their party offices." "If such a report is true, we will take action immediately. This is not done," he said.

He said even if people are angry wit those who face the TMC activists’ ire, none can take law into their hands. "The party does not approve of this," Mr. Chatterjee trashed the claim of the Leader of Opposition Suvendu Adhikari about large-scale rigging in the city civic poll and said BJP would have secured higher number of seats if it had connection with the general people in the city.

"TMC works throughout the year for people who are at the grassroots. Those who do not have any connect with people are rejected in the polls every time … There is no point in giving importance to someone who is making irresponsible statements every day," he said without naming Mr. Adhikari.

Mr. Chatterjee said the continuous work done by the TMC-led KMC in providing civic amenities to the people for the past 10 years had made it sure of decimating the opposition, which, he said, has no base among the people.

Mr. Chatterjee, who is the State industries minister, said the Bengal Global Business Summit to be held next year will take the State to a new trajectory of investment.

"Important investment proposals are slated to be clinched at the business summit," he added.