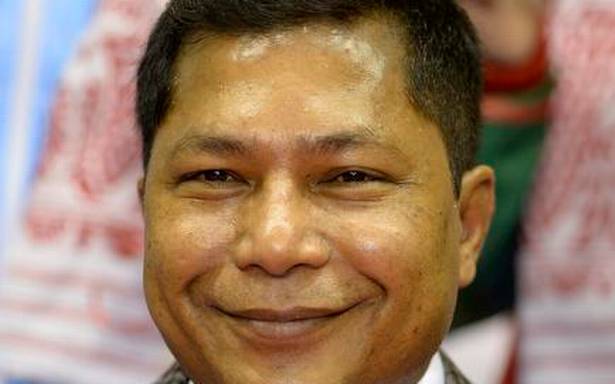 Former Meghalaya Chief Minister Mukul Sangma on Thursday said the need for a pan-India alternative to the Bharatiya Janata Party (BJP) made him and 11 other Congress MLAs join the Trinamool Congress (TMC).

He also said Congress was failing to play its role as the main Opposition party in the country and people were beginning to believe it was weakening.

“Democracy needs an Opposition that can effectively take the party or coalition in power head-on. We looked at available options and reached out to people and friends. We tried to understand the pulse of the people and it said there is a need for a strong pan-India alternative political party,” Mr Sangma told journalists in Meghalaya capital Shillong .

He felt the TMC was growing in stature as the party that could stand up to the BJP and its allies.

The 12 MLAs had on Wednesday evening submitted the letters of resignation from the Congress to Assembly Speaker Metbah Lyngdoh. The Congress had 17 MLAs and the anti-defection law will not affect the departure of 12 of them.

The State is ruled by a coalition of parties led by the National People’s Party, a member of the BJP-led North-East Democratic Alliance (NEDA).

Trouble within the Congress started brewing when Shillong MP Vincent H. Pala was made the State unit president two months ago. Mr Sangma was reportedly kept in the dark about Mr. Pala’s appointment.

Mr. Sangma, who was the sole contender for the Chief Minister’s post if Congress returned to power in 2023, had apparently felt threatened by the development.

Soon after Mr. Pala was made the State Congress president, Mr Sangma went to Kolkata and met TMC leader Abhishek Banerjee. He was cryptic about the meeting and denied any plan to change the party.

“We tried our best to prevail upon our central leadership. We kept going to Delhi, which should have been the other way round. Despite all efforts, we failed,” he said.

Mr Sangma said it was a conscious decision to wear the TMC colours. “The country must understand the prevailing political scenario. We looked at the available space to play the role of Opposition and also seek the mandate of the people,” he said.

He said the 12 lawmakers had analysed their stint with the Congress before deciding to make the switch.

“In the search of the alternative, I came across Prashant Kishor who can make a difference. When we interacted, I felt we share the same objective,” Sangma said.

Eight of the MLAs, including Mr. Sangma, are from the Garo Hills region of Meghalaya while four are from the Khasi-Jaintia Hills. The five remaining Congress MLAs are said to be close to Mr. Pala.

Congress had received the first jolt in Meghalaya when former Chief Minister D.D. Lapang joined the NPP in December 2018. A few others followed.