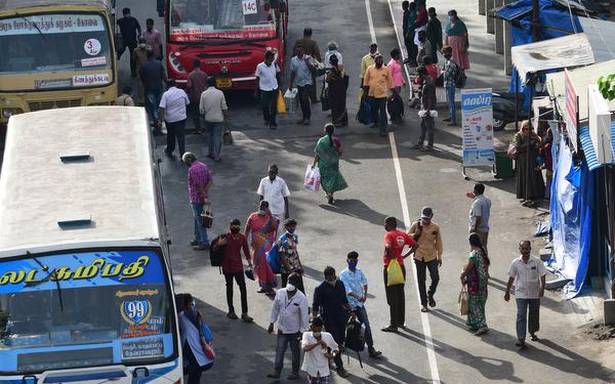 In the case of town buses, however, personal distancing norms went for a toss in a few buses. Officials claimed that all the town buses were instructed to allow only 20 sitting passengers and 20 standees and that some buses might have allowed the standees to sit. These routes would be monitored and additional buses would be operated as per the requirement from Tuesday, they said.

Many private bus operators chose not to operate their buses from Monday despite relaxations in lockdown. V. Duraikannan, president of Coimbatore District Bus Owners Association (South), said that only around 10 town and mofussil buses were operated in the district on Monday as most of private bus operators have submitted stoppage forms at the respective Regional Transport Offices during the lockdown period, which are yet to be revoked. The operators might not operate their buses with the 50% occupancy rule as it would not be financially viable amid the hike in fuel prices, he said.

In Tiruppur district, TNSTC officials said that around 333 buses, comprising 166 town buses and 167 mofussil buses, were operated on Monday .