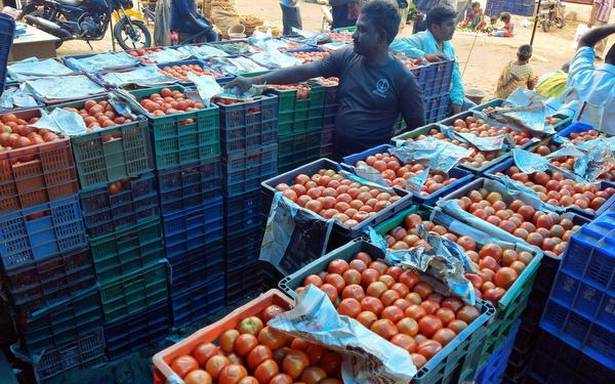 Despite 42 metric tons of tomatoes arriving from Bangaluru, the prices had not fallen and continued to be revolving around Rs 65 and Rs 75 per kilogram, said merchants at the Gandhi Market here on Thursday.

Most of the produce are brought to Dindigul and Oddanchatram wholesale markets, merchants said.

The price touched a new high two days ago that it was selling at Rs 80 to Rs 90 per kg at wholesale market. A majority of the consumers, on hearing the price, chose to either less procurement or preferred not to buy the tomatoes.

Though tomatoes have started arriving from other cities, with rains continuing in Dindigul and other parts, it was unlikely that the price may fall, a merchant said and added that only when the local producers brought in their commodity to the market, the price may stabilise.

Meanwhile, retail merchants from other districts, who had turned up at the Gandhi Market here, were seen avoiding purchase of tomatoes as they predicted a further fall in the price as the arrivals were expected to improve by Saturday.

In a bid to beat the heat, the State government had directed all the district administration to open up farm fresh outlets and sell tomatoes at Rs 45 per kg. With this, the prices may further dip.

However, the merchants are confident that the price may remain the same at least for the next five days.