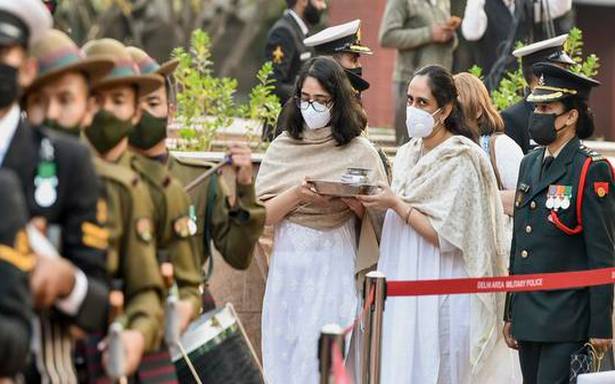 Chief of Defence Staff (CDS) General Bipin Rawat, his wife Madhulika Rawat, an Army Brigadier, and ten others perished when an Indian Air Force (IAF) Mi-17V5 helicopter carrying them crashed into a heavily wooded area of the Coonoor ghat in the Nilgiris in western Tamil Nadu on the afternoon of December 8. The cause of the chopper crash, in which there is only one survivor, is being investigated.

A British appellate court opened the door Friday for Julian Assange to be extradited to the United States by overturning a lower court ruling that found the WikiLeaks founder’s mental health was too fragile to withstand the American criminal justice system.

Noting that the air quality in Delhi had “started improving,” the Supreme Court on Friday asked the Centre’s Air Quality Commission to take a decision on relaxing restrictions imposed by the court on pollution sources, including industries, constructions and factories, in the capital.

37% of trains in India being hauled by diesel locomotives, rest by electric engines

A daily average of 13,555 trains are operating in India currently, and 37% of these are being hauled by diesel locomotives, Railway Minister Ashwini Vaishnaw said on Friday. The remaining 63% are hauled by electric engines, he stated in a written response to a question in Rajya Sabha.

The government spent a whopping 80% of funds under its flagship Beti Bachao, Beti Padhao (BBBP) scheme on media campaigns and must now revisit this strategy and invest in measurable outcomes in health and education for girls, noted the Parliamentary Committee on Empowerment of Women in its report tabled in Lok Sabha.

Aryan Khan, son of actor Shah Rukh Khan moved the Bombay High Court seeking minor changes in the bail conditions imposed on him by the court in the drug racket case against him. On October 29, a single bench of Justice Nitin Sambre granted bail to Mr. Khan, 23, and two others and directed that they be released from Arthur Road Jail after executing a cash bond of ₹1 lakh with one or more sureties.

A joint study conducted by researchers at New York University and KU Leuven University has found that Facebook misidentifies thousands of political ads, a practice that could lead to manipulation of users on the platform.

TN colleges directed to vaccinate all students above 18 years

Health Minister Ma. Subramanian on Friday directed colleges to vaccinate all students over the age of 18 to prevent the spread of COVID-19. Speaking to media persons on the sidelines of a meeting with educational institutions organised at Ripon Buildings on Friday, Mr. Subramanian said more than 50% of college students were yet to be vaccinated. For instance, 46% of the four lakh engineering students in the State have received the first dose of vaccine and 12% have received the second dose. “All students who are over 18 years have to be vaccinated. The Greater Chennai Corporation will start special camps for students in colleges on Saturday,” said Mr. Subramanian.

The first teaser of Gautham Menon and Silambarasan TR’s Vendhu Thanindhathu Kaadu is out. The rural action-drama will be STR’s next after his smash hit Maanaadu, and has music by A.R. Rahman. A haunting score with ARR’s voice in the background accompanies the one-and-half minute long footage, that takes us through the life of a youth and his family, and the sudden problematic circumstances he runs into.

Five months after he was nominated to the post of U.S. Ambassador to India, Los Angeles Mayor Eric Garcetti will get a confirmation hearing with the U.S. Senate. Mr. Garcetti will appear before the Senate Foreign Relations committee on Tuesday, as per the Senate calendar.

Maharashtra Minister Nawab Malik tendered an “unconditional apology” to the Bombay High Court on Friday for “wilfully breaching” his undertaking given to court that he would not make statements against Dhyandev Wankhede, father of Narcotics Control Bureau zonal director Sameer Wankhede, and his family.

Singhu in their hearts, farmers to leave site on Saturday

The song and dance had started the day Prime Minister Narendra Modi announced the repeal of the three farm laws but the roar of “Jo Bole So Nihal… Sat Sri Akal (victory slogan in Punjabi)” was loudest on Thursday when a speaker announced from the main stage at the Singhu border that all their demands have been accepted and they will leave for their homes on Saturday. Farmers camping at the protest site for the last 378 days broke into a celebratory dance as beats of drums played in the background.