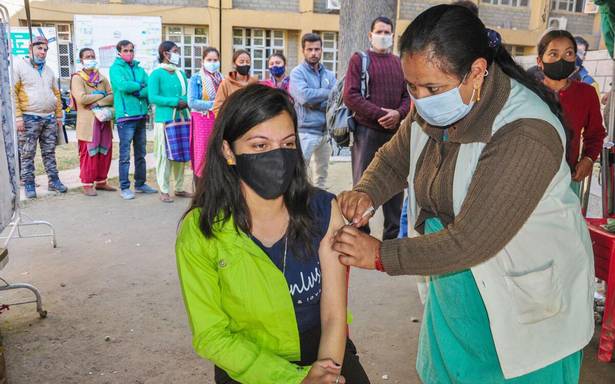 A magistrate’s court in Mumbai on November 17 declared Mumbai Police ex-commissioner Param Bir Singh a “proclaimed offender” in an extortion case registered against him and other police officers in the city.

They were among four killed in Hyderpora ‘encounter’ on November 15 evening and buried at a far-off hillock in Handwara.

An official said security forces established contact with two groups of militants on November 17 afternoon following a tip-off and engaged them in gunfights.

The Chief Justice of India said the court would consider the prospect of ordering a complete shutdown after November 21, but asked why the government had not taken steps earlier to rein in industrial activity, construction debris etc., which spew pollutants 365 days a year, unlike stubble burning, which is only a seasonal occurrence.

A red alert has been issued for Chennai and its neighbouring districts — Tiruvallur, Kancheepuram and Ranipet — for November 18. Extremely heavy rain, measuring above 20.4 cm, is likely in one or two places.

West Bengal Assembly Speaker Biman Banerjee referred the matter to the committee of privileges and urged the panel to investigate and submit its report to the House in its next session.

Police complaints have been filed against Mr. Das in Mumbai and Delhi as the sharp debate on his video “I come from two Indias” mirrored the polarity of the monologue itself with celebs, politicians and a host of others speaking out.

Counsellor in India’s Permanent Mission to the U.N. Kajal Bhat took the floor to make a second statement in the Council after Pakistan’s Ambassador to the U.N. Munir Akram raked the issue of J&K in his remarks at the open debate.

Europe is only region with increasing COVID-19 deaths, says WHO

It was the seventh consecutive week that COVID-19 cases continued to mount across the 61 countries WHO counts in its European region, which stretches through Russia to central Asia.

China, U.S. to ease restrictions on each other’s media workers

The official China Daily newspaper has said that the agreement was reached ahead of the November 16 virtual summit between Chinese leader Xi Jinping and the U.S. President Joe Biden.

In the case of donations, the the Maharashtra Bench of the Authority for Advance Ruling said if the purpose of the donation is philanthropic and leads to no commercial gains and is not an advertisement, then it would not attract GST.

“I am delighted to welcome Sourav to the position of Chair of the ICC Men’s Cricket Committee,” ICC Chair Greg Barclay said in a release.